A smothering defensive effort made up for some missed chances early in No. 16 Florida’s 1-0 win over USF in the second round of the NCAA women’s soccer tournament.

Before 1,142 at Donald R. Dizney Stadium on Friday, Florida got a goal from junior Mayra Pelayo late in the first half and let it stand up for the rest of the game.

“We knew it was going to be a battle, and it certainly was that,” Florida soccer coach Becky Burleigh said. “I don’t think we’ve ever had a game against South Florida that wasn’t.”

Burleigh said she felt the Gators were unlucky to not score more than once in a first half in which they out-shot the Bulls 8-2. Earlier in the half, Pelayo had a shot that slipped past USF goalkeeper Katy Elliot but rolled just outside the goal line before winding up out of bounds. That led to a corner kick sequence in which midfielder Sammie Betters had a goal called back due to the fact refs ruled she had a hand ball when she trapped the ball before her shot.

“I loved the way we came out,” Burleigh said. “We had a really aggressive mindset.”

Eventually, Florida got on the board 42 minutes into the half when junior midfielder Briana Solis found Pelayo open on the left wing. Pelayo finished with a curling 10-yard shot over Elliot into the corner of the net.

“We work on set pieces every practice,” Solis said. “We come early. So I saw that player move in and I knew Mayra was open. It’s just nice to see it pay off, all of that hard work.”

The Gators maintained their aggressiveness in the second half, matching a season-high by drawing 10 corner kicks while outshooting USF 12-4 for the game. Defensively, Florida draped USF leading scorer Evelyne Viens, limiting the center forward to just two shots. Viens came into the came with 12 goals and nine assists.

“Viens is a really good player,” Burleigh said. “She’s tough. She was really held to very little tonight because of a whole team effort. That to me is one of the highlights of the match, just getting the shutout and advancing.”

Florida held USF to just one shot on net as goalkeeper Kaylan Marckese had one save for the shutout. Florida junior defender Rachelle Smith said communication was the key to limit Viens and the rest of USF’s shooters.

“Not only to us communicating with each other, our midfielders, our forwards, they were letting us know even though we weren’t seeing it,” Smith said.

Florida advanced to the round of 16 in the NCAA Tournament for the 13th time in the last 21 seasons. The Gators (16-6) will face Washington State (10-7-4) on Sunday at 2 p.m. at Dizney Stadium. Washington State beat Tennessee in penalty kicks earlier Friday afternoon after the two teams played to a 2-2 draw.

“It’s probably an equal situation because I thought our match was a very physical match, they obviously played overtime,” Burleigh said. “This is the toughest weekend of the NCAA Tournament, trying to play two games in such a short period of time at such a high level.”

Notes: Florida freshman midfielder Deanne Rose returned from the Canadian National team and had three shots against USF. “I was a little concerned because that was a physically demanding camp that they had, it was a long camp,” Burleigh said. “So when she got back, it was cross-country travel, we had her take a couple of days off and we asked if she wanted to take more days but she was so excited to get back with us. We were really happy to have her back. Her display of power is electrifying. I wouldn’t want to be defending with her running at me.” … Smith will be one of three UF athletes hand-signing the national anthem during UF’s football game on Saturday against UAB.

UF soccer clipped by No. 6 FSU 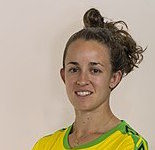