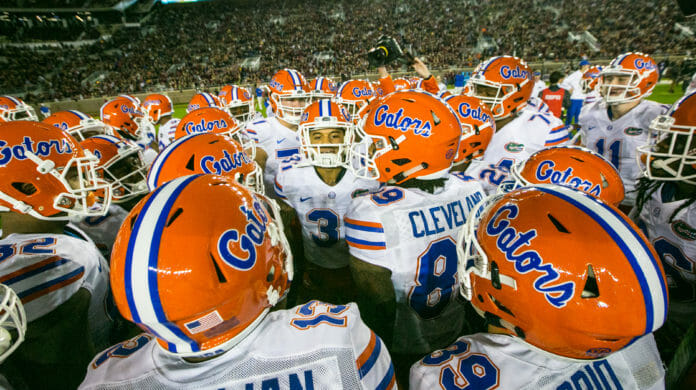 It has been awhile since The Back Nine has been with you and it’s a day late this week because of Christmas. I hope your day was as good as mine.

10. Dan Mullen has been working feverishly on trying to supplement a depleted roster and it’s going to take time. Not just this year, but in the coming years. Because we still aren’t sure who may or may not be going pro early and how many (Antonio Callway is turning pro) of the Knucklehead Nine could be returning if they get through the student conduct court, it’s hard to put a number on how many scholarship players Florida will have next year. Just be certain of this — it won’t be anywhere near the 85 maximum unless there are a lot of walk-ons put on schollie. Everybody wants to talk about the quarterback situation and with good reason, but one of the biggest issues Mullen inherits is at wide receiver. Quick, name the top three catches by a Gator receiver in 2017. Waiting. Waiting. The truth is that receiver was a position where I felt Florida had the biggest difference in what it was supposed to be and what it turned out to be. Maybe the two transfers will help and maybe Mullen can pull off some coups in the late signing class. But more than anything, the guys he has on this team right now need to get stronger. Going up and making a tough catch so often comes down to hand strength. And the stronger you are, the easier it is to separate from a defender. Callaway’s annual screw-up was only part of the reason Florida might have been the 14th best receiving group in the SEC after you evaluate the whole season. These guys need some coaching and they really need a real weight training program.

11. Gator fans enjoyed the heck out of Eddy Pineiro’s time here. He was a fan favorite with the chants, the No. 15 jersey and leaves UF as its most accurate field goal kicker ever. But it is still an interesting legacy, because Pineiro rarely missed, but was also rarely put in position to make a game-winning kick. The closest to it were probably the two he kicked (from 26 and 34 yards) in the final 4:37 of the 16-10 win over LSU last year. Again, it’s not his fault that the opportunities didn’t come up and if they had everyone in the Gator Nation would have felt pretty good about the possibility of him making them. But here is something to consider — Pineiro was so good he probably hamstrung the Gator offense. You saw the play-calling once they got inside the 40. Don’t get me wrong, he was a special kicker and the fact that they never let him try a 60-something yarder at the end of a half is still bewildering. Florida will certainly miss him and after watching the NFL this weekend, he may be able to overcome the Roberto Aguayo jinx and be selected higher than normal for a kicker.

12. Which brings me to this point, the kind of thing you think about when you spend a lot of time with ice on your knee. How is the NFL so bad at quarterback and place-kicker? This is the cream of the crop, right. There are 32 kickers and 32 starting quarterbacks and that’s the best you can give us? I know injuries have played a big part in the quarterback play, but it is still amazing that there are not 64 talented, functional quarterbacks in a country of more than 300 million people. Mind boggling. That said, I’m excited for the NFL playoffs and I have jumped back on board with the Rams. I was a Rams fan as a kid and through the early part of my adult life, but when they moved to St. Louis I dumped them. But they’re back and I’m back. The Rams long-sleeved T-shirt Kelsey gave me for Christmas will be in the main rotation.

13. I don’t have the answer, although I know some people that Mike White could put on the floor as the fifth starter who could help. The guy sitting next to you on the airplane when you just want to sleep, the lady on the hands-free device next to you on the elliptical, the person who doesn’t get it as you are trying to walk away that you have somewhere to be in five minutes but you haven’t heard everything about his fantasy team yet. You know, people who like to talk. Florida, instead, is the “Quietest Team in America.” On the Friday broadcast, the announcers purposely quit talking to see if you could hear a peep out of the Gators on defense. It’s kind of an imperfect storm in that UF has so many laid-back personalities and no matter how much White hammers at the players to communicate, it doesn’t look like it will happen this season. We’ll see and we will also see if John Egbunu’s return gives the Gators the interior defense that has been lacking. All we know for sure is that UF did not get out of its pre-conference schedule the kind of numbers it hoped for. The RPI is at 80, but the league is so much better that there is a bigger-than-usual chance to get healthy. Of the 18 conference games Florida has starting Saturday, 14 of the opponents have top 58 RPI and nine in the top 30. (It doesn’t help that Baylor, Florida’s lone non-conference opponent remaining, is at 151). Remember, too, that the selection committee this year is putting more weight on wins away from home this season and there are plenty of opportunities there to help the resume.

14. Any time you are in a tournament, it flies by so fast you don’t have a chance to enjoy the wins. And because they always end in a loss for all but one team, time stops so suddenly it makes you lurch forward. Now, Mary Wise can look back at what her volleyball team accomplished and smile. “It was a terrific run, not only in the tournament but the whole season,” Wise told The Back Nine. “This team embraced the moment. But the tournament is a sprint so you don’t get to celebrate the wins.” It was an incredible season for Wise and her team and created a lot of volleyball fans in the Gator Nation. Everyone wanted it for Wise, who is such an asset to this community and one heckuva great coach. But it was certainly not good luck to have to face a huge disadvantage in the stands against Nebraska. “Nebraska played at a high level,” Wise said. “But 17,000 in the stands didn’t hurt.”

15. Maybe it’s just me and maybe it is only because I have watched every bowl game because of my knee replacement surgery, but it has been a big dud so far. Perhaps it will start to get interesting today with Florida State playing and the SEC (Missouri) getting involved. It seems like it has been forever since we knew who was playing in the College Football Playoff and there really isn’t much that any talking head can offer that is going to change the way you feel. But it doesn’t seem to have the same buzz as it has the past three years and I think a lot of that is because it’s such a regional tournament this year. It will be interesting to see if that shows up in the ratings.

16. Some housekeeping — the next Dooley Noted Podcast will be up on Jan. 2 and I will be back on radio the same day. Let’s all have a great 2018, not that 2017 wasn’t a lot of fun. Look for my year-end story later this week. There, have I plugged enough things?

17. I haven’t spent a lot of time on Twitter during the last 2½ weeks for a lot of reasons. But it’s part of the job so I am back in and saw this one from Rams running back Todd Gurley, who I think should be the NFL MVP this season — “Fantasy owners you’re welcome now leave us alone. Merry Christmas!” I don’t play Fantasy Football anymore, but I have to think a guy who scored 19 touchdowns and has over 2,000 total yards made a lot of teams contenders this season.

18. Unfortunately, it’s still going to be awhile before I can get into the gym, but that doesn’t mean I can’t come up with a strong playlist. Try this one:

• “Really Wanted You” by The Shelters.

• And for an oldie, “Go All The Way” by the Raspberries.