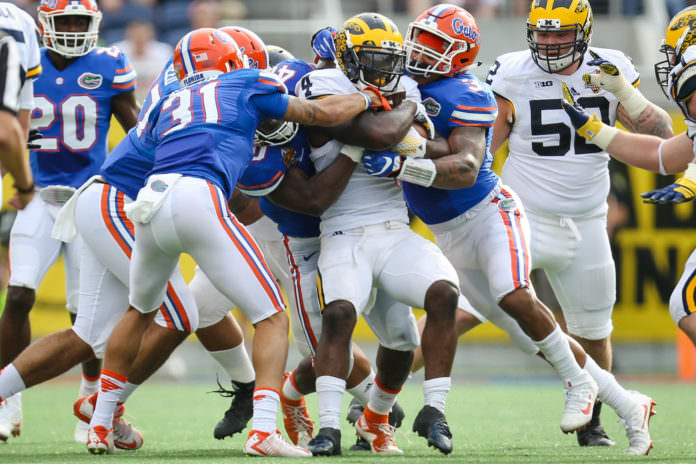 The way the two head coaches had been carrying on before Wednesday leading up to the Florida-Michigan game, perhaps the best thing would be to have them meet at the middle of the field and wrestle at 3:30 p.m. Saturday.

Winner take all. Except there’s something that makes me think Jim Harbaugh would have a shiv tucked into his khakis.

Anyway, because that won’t happen, there will be a football game (minus roughly one-tenth of Florida’s scholarship players) in Arlington, Texas, and there seems to be a theme on both sides.

May the toughest team win.

Not all college football games are decided by which is the toughest team. Some are about schematic advantages, team speed, officials’ calls and breaks.

And there will be games on Florida’s schedule where those are the most important things.

But make no mistake about it.

Florida can’t win Saturday if it is not tough enough.

Some of that is simply finding out if Florida is tough enough to deal with yet another group of suspensions. These guys have 10 teammates who won’t make the trip and one never knows how a guy handles his buddy or even his rival missing out on an opportunity like this.

Still, most of it is physical.

There is an opportunity for some guys to show how tough they are and let their coach know they will be there in that department whether their punished teammates are there or not.

How tough are you, Florida, in a tough situation.

Of course, when you think Michigan football, you think tough.

You think Harbaugh and you think tougher.

This is going to be a physical game. Somehow it feels as if — with all of these UF suspensions — it will not only go to the team that is tougher physically, but tougher mentally.

Jim McElwain, whose voice was dripping with disappointment Wednesday, was in a better mood Monday when he talked about this. Then, the frustrations were far enough in the rear view to look ahead. On Wednesday, they were still too fresh.

But he knows that a big part of the toughness equation is how players bounce back from bad plays — and they will happen — and perform on the next one. He wants short memories.

“I’m with the team a lot more than he is,” said receiver Josh Hammond earlier this week, “so I think from a player’s standpoint we’ll be fine from a mental standpoint.”

That was before the latest round of suspensions and well before a defender has been beaten on a deep pass or a running back had his bell rung on national TV in an NFL stadium that’s big enough to house another NFL stadium.

The truth is that we have no idea how tough this team is or will be with everything that has happened. We just know it had better be.

I don’t put a lot of credence in what happened two years ago in the Citrus Bowl, but the memory of what happened that day doesn’t just disappear with time.

Michigan was the tougher team. Florida was the team that didn’t look like it wanted to be there (and in the case of Jordan Scarlett wasn’t there because of a different suspension).

So I asked McElwain about it, how his team back then certainly didn’t look tough enough on that day.

“Ha, that’s an understatement,” he said.

And with all of the hoopla surrounding the quarterbacks and the rosters and the depth charts and this different opening game and the shame of the suspensions, McElwain still can’t wait to see the level of toughness his team will bring to Arlington.

“I think a lot of it has to do with the want and, you know, we’ll see,” he said. “Obviously, they’re a team that runs your speed sweep stuff and do stuff that will try to get you off the edge and run by you, but at the end of the day when they get in regular or green personnel and motion around and say, ‘We’re coming,’ we’ll see if we can stand up to it.”

“That’s one of the things that’s a challenge against this team,” McElwain said. “It’s interesting. When you build your team, you build your team to win your conference or your side of the conference and yet in our case, we’re going to see a couple similar teams to that on our schedule. This will be a good test for us that way.”

There is more, as we all know, to being tough than just saying you will be. You can clinch your fist when the bully picks a fight, but are you really willing to fight back?

When you’re knocked down for whatever reason, can you get back up?

It’s not like McElwain’s teams have not shown that toughness. Last year’s game at LSU was all about toughness and the tougher team won.

It’s just that it hasn’t always been consistent.

It wasn’t there at Arkansas or at FSU or against Alabama in either SEC title game.

And with so many young players on each side, there are going to be a lot of wide eyes on both teams.

There is a fine line between being tough and being smart. A 15-yard penalty for a late hit doesn’t show you’re tough, just selfish. There is no doubt that both teams will be fired up for a game of this magnitude, but it has to be controlled.

“I think what you kind of try to do is let the game itself and the atmosphere handle that,” McElwain said.

This much we know — we’re about to discover something about this Florida football team in a few days.

And if these Gators aren’t tough enough — physically and mentally — they’re going to find some tough luck.