The Florida women’s volleyball team closed out the 2019 home season in style.

The 12th-ranked Gators improved to 27-4 overall with a solid 3-0 win over a talented UCF squad Friday in a second-round match of the NCAA Championship Tournament.

“I think maybe folks that weren’t here and didn’t see the match would see 3-0 and not understand just how difficult a win that was and what a challenge for our team,” UF coach Mary Wise said. “I have the utmost respect for UCF.

“McKenna (Melville) is such a unique talent. To be able to keep her well below her average, I think our size helped with that. But the key to the match was the play of our veterans.”

UF, which shared the Southeastern Conference regular-season crown with Kentucky, turned back the Knights (25-8), champions of the American Athletic Conference, by scores of 25-21, 25-18 and 25-17 before an Exactech Arena crowd of 2,412.

Florida improves to 20-0 all-time against the Knights while advancing to the regional semifinals (Round of 16) for the 26th time.

Playing their second straight match without their top scorer, sophomore Thayer Hall, the Gators had to improvise.

They did a splendid job, with junior Paige Hammons responding with a double-double, posting a match-high 16 kills to go with 10 digs and a .314 hitting mark.

Senior Rachael Kramer was right behind with 15 kills and a match-high .667 hitting mark, adding a solo block and two block assists.

“I think Mary said it great,” Hammons noted. “Riley Fischer and Paula Cerame and Mia Sokolowski coming in and stepping up showed how much depth we have on this team and how many different people we can have in and show different teams different looks.”

Fellow senior libero Allie Gregory was all over the court, recording a match-high 17 digs that moved her into fourth place all-time at UF.

“She had a career-high (25 digs) to help us win a share of the SEC title, and she moves up to fourth all-time in a match that propels us to the Round of 16,” Wise noted.

Gregory was her usual unassuming self.

“The seniors were all talking about how we weren’t going to lose in our last match in the O-Dome,” she said. “We had some new players out on the court tonight, and it can be scary to be out on the court for the first time in a match that sends you to the Sweet 16. The thing that I have the most respect for is the way that these new players came onto the court and struggled at first, but made play after play after the first set. I have so much respect for Riley and Paula in the back row.”

Junior right-side hitter Holly Carlton was solid as usual, finishing with eight kills and no errors and posting a .533 hitting percentage, while setter Marlie Monserez had a match-high 39 assists and narrowly missed a double-double with nine digs.

Kristina Fisher was UCF’s top performer, finishing with 10 kills, while Melville added nine to go with her match-high 19 digs, just missing a double-double.

“It’s the hand we were dealt,” Wise said of Hall’s absence. “I’m not sure I’ve ever been more proud of a group. To not have your leading point scorer and to be able to beat a team as talented as UCF without that speaks volumes.” 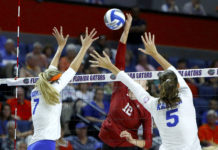