It didn’t look like a team that had just lost its sixth straight to its biggest rival in front of a sellout crowd.

There were giggles and singing and optimism dripping from the podium after No. 7 Florida lost a tight one to No. 1 LSU Friday night at Exactech Arena.

“We did improve from our last meet,” Florida gymnastics coach Jenny Rowland said. “This Gator team likes to make it interesting. But we fixed the things we needed to fix.

“It’s an exciting time for us.”

A tight competition came down to the end and LSU could celebrate it when junior Sarah Finnegan won it with the final routine of LSU’s evening, a 9.95 score on the balance beam.

“I didn’t watch a single LSU routine all night,” said Florida senior Alex McMurtry, who won the bars at 9.925. “I was focusing on how together we were. You would have thought it was March or April, the energy we had.

“It was a bittersweet ending when I looked at the final score, but I was so proud of our team.”

The crowd of 9,661 was the first-ever sellout for UF gymnastics, although there were three bigger crowds in the O’ Dome before the renovations.

While many in the crowd left muttering at some of the scoring, that was an example of the things Rowland said the team wasn’t concerned with.

“It’s something we can’t control and we have to be undeniable sometimes,” she said.

In only the second meet of the season for both teams, there were plenty of gaffes and stumbles. It started early when LSU’s Ashlyn Kirby fell on the bars and Florida senior Rachel Slocum stopped short of launching into her vault.

Slocum stopped, went back and waited for a bar routine to finish and then took it easy on her vault knowing her score wasn’t going to count. She finished with an 8.55 in the next-to-last spot in the rotation.

“I’m still trying to mull it over in my brain,” she said. “I think it was just a counting issue in my steps. I’ll definitely get it together.”

Still, Florida led after the first rotation. But the Gators trailed after the next event as LSU had three scores of 9.9 or better on the vault.

But while the Gators were piling up an impressive floor score in the final event, the Tigers did not waver with all of the scores they counted being 9.85 or higher.

“We had some key mistakes here and there,” Rowland said. “But that’s OK. It was the second the meet of the season.”

LSU’s Myia Hambrick was the all-around winner with a score of 39.55 while Boren finished second.

No denying Thomas at nailing first 10 in Florida’s win 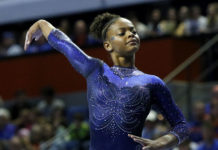