For the second time in as many days, the Florida baseball team had to rally from a sizable disadvantage.

Unfortunately for the Gators, they fell just short of the mark Saturday.

Florida sophomore shortstop Brady McConnell homered twice and, in the process, tied Mark Ellis for the Gators’ single-season record for home runs in a season by a shortstop at 14.

Tennessee junior third baseman Andre Lipcius had four of the Vols’ 12 hits, as he doubled twice and homered with three RBIs.

A two-run single by Lipcius and a two-run homer by left fielder Alerick Soularie highlighted the outburst and gave Tennessee a 6-3 lead.

The Gators were forced to go to their bullpen early once again after Florida starter Jack Leftwich was already up to 86 pitches in the fifth inning. Leftwich gave up three runs in 4.1 innings, striking out five and walking two.

“It looked like his fastball didn’t have quite the same action to it,” Gators coach Kevin O’Sullivan said. “And it’s just hot.”

After Tennessee put up another run in the sixth to take a four-run lead, Florida countered with a Wil Dalton two-run homer to pull back within 7-5.

The Vols scored one more time in the seventh to go back up three, but the Gators rallied in the bottom half of the inning.

McConnell hit his second longball of the game with one out, then Austin Langworthy and Nelson Maldonado hit back-to-back singles. Brady Smith followed with a double into the gap in right center field to score Langworthy and the play should have also plated Maldonado.

But the senior designated hitter tripped coming around third and was forced to retreat to the bag with the Gators down one run.

The base running miscue proved crucial, as Maldonado was thrown out during the next at-bat trying to come home on a grounder to third.

Florida had a final chance in the bottom of the ninth after singles by Langworthy and Dalton with two outs, but a flyout by Kendrick Calilao (who went 2 for 4 with a double, walk and two RBIs) ended the game.

The Gators clinched their first losing record in the SEC since 2013; that year, Florida finished 29-30 overall and 14-16 in conference.

That year was the last time the Gators didn’t advance to the NCAA regionals, a fate they are trying to avoid again.

“We just need to keep winning as many games as we can and see if we can give ourselves a chance to do something,” McConnell said. “Obviously, I wish we would have pulled that one out.” 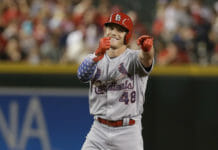