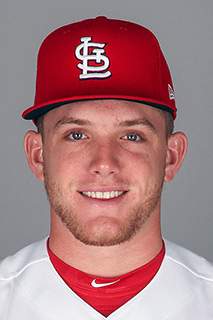 Former Florida outfielder Harrison Bader is scheduled to make his Major League Baseball debut Tuesday night with the St. Louis Cardinals after being called up from Triple-A Memphis earlier in the day.
Bader, a third-round draft pick (100th overall) by the Cardinals in 2015, replaced outfielder Dexter Fowler on the team’s roster. Fowler was placed on the 10-day disabled list with a strain in or near his left wrist. The injury has also been described as a forearm strain.
At Memphis, Bader hit .297 with 19 homers and 48 RBIs in 97 games. In 289 career minor league games, Bader has batted .287 with 49 home runs and 138 RBIs, hitting 50 doubles, eight triples and stealing 39 bases in 64 attempts.
St. Louis is playing Colorado and it’s listed as one of MLB Network’s regional games.