GatorSports.com
Facebook
Twitter
Pinterest
WhatsApp
Special to Gatorsports.com
It’s a sweep of 2020 gymnastics coaching honors for Florida’s Jenny Rowland.
The Women’s Collegiate Gymnastics Association named Rowland its National Coach of the Year on Wednesday, a day after she was awarded the SEC Coach of the Year and earlier this month, picked up the WCGA Region 5 Coach of the Year. A vote of the nation’s collegiate gymnastics coaches gave Rowland this season’s national award.
Rowland is Florida’s fourth named WCGA National Coach of the Year: Rhonda Faehn (2007),  Judi Markell (1994) and Ernestine Weaver (1992).
Rowland led Florida to a 10-0 record and No. 2 ranking before the season was canceled by COVID-19. The Gators won their second consecutive SEC title with a 7-0 league record. It was UF’s first undefeated league season since 1992 when all league teams began meeting during regular season action.
Florida held the No. 2 position throughout the Road to Nationals rankings after being picked No. 3 in the preseason vote.
The Gators ranked in top three in each of the final event rankings – No. 1 (beam), No. 2 (floor) and No. 3 (vault &amp; floor).
Florida’s team total of 198.375 (Jan. 24 vs LSU) is nation’s No. 3 total for 2020 and also is No. 3 total all-time for Gator program.
Four Gators – Alyssa Baumann, Rachel Gowey, Savannah Schoenherr, Trinity Thomas – earned nine WCGA All-America honors. Thomas is SEC Gymnast of the Year. She was joined on the All-SEC team by Gowey and Schoenherr.
Florida equaled four Gator individual events records (10.0 – bars, beam, floor; 39.825 – all-around) and one team event record (beam – 49.675) in 2020. 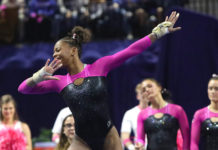