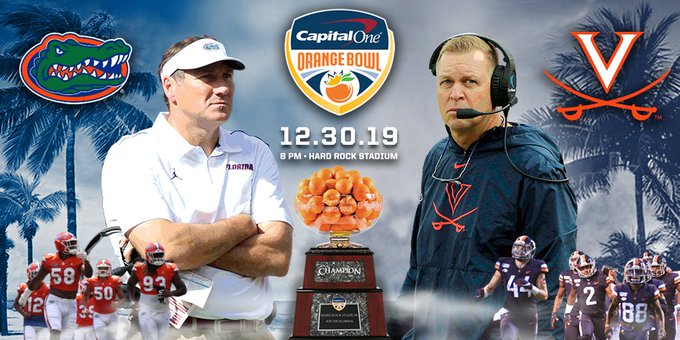 Florida: The Gators’ only losses were to playoff-bound LSU and SEC finalist Georgia. Virginia will be the “home” team for the game but Florida — with a massive fan base in the Miami area — will unquestionably have the bulk of the crowd. Gators coach Dan Mullen inherited a rebuild after Florida went 4-7 in 2017, and he’s posted two straight 10-win seasons since taking over in Gainesville. And with a win, the Gators would have back-to-back top-10 finishes in the AP poll for the first time since 2008 and 2009.

Virginia: Hard Rock Stadium has not been kind to the Cavaliers. Virginia is 1-8 in that stadium, including 0-3 in bowl games there and a loss to Miami earlier this season. The three bowl losses in that stadium came by a combined 86 points. But the Cavaliers’ win total has increased in three straight seasons under coach Bronco Mendenhall, who was 2-10 in his debut 2016 campaign there — followed by records of 6-7, 8-5 and now 9-4 entering this matchup. The Cavaliers haven’t finished a season ranked in the AP Top 25 since 2004, and could change that this year.

Florida: Fourth appearance in the Orange Bowl (not including BCS title game after 2008 season), 45th bowl appearance in school history.

Compiled by The Associated Press