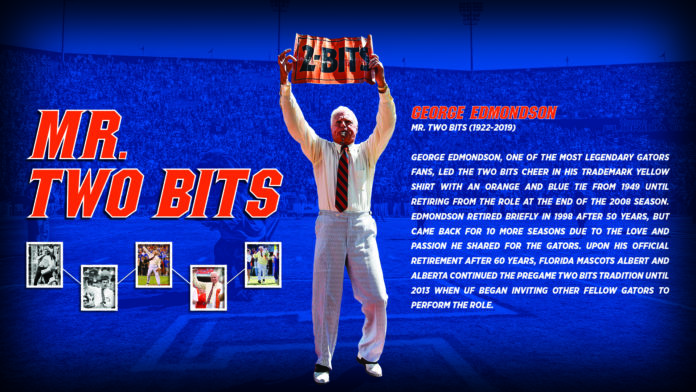 George Edmondson, who began the famous Two Bits cheer inside Ben Hill Griffin Stadium in 1949, will be commemorated with a mural inside Gate 1.

To be a member of the Florida Gators and Gator Nation means showing pride & joy, having fun, and relishing in the rich tradition and amazing education that’s within the University of Florida brand.

No individual embodied those ideals more than George Edmondson, who passed away at the age of 97 on July 2.

It all started in 1949 at Florida Field when Edmondson looked at the crowd around him as the Gators were playing The Citadel. Fans were booing the team and George would not stand for it, he jumped up and got the fans cheering, and so began the legend of Mr. Two Bits.

For 60 years, Gators fans from all across the world became eternally grateful for the man who started every Gators home football game with the phrase “Two-Bits, Four-Bits, Six-Bits, a Dollar. All for the Gators, Stand Up and holler!” George Edmondson led the cheer in his trademark yellow shirt with an orange and blue tie from 1949 until retiring from the role at the end of the 2008 season. Coincidentally, Florida’s home finale that season came against the Citadel, providing a unique symmetry to Edmondson’s decades of leading Florida fans in the Mr. Two Bits cheer.

Edmondson retired briefly in 1998 after 50 years, but came back for 10 more seasons due to the love and passion he shared with the Gators. Upon his official retirement, Florida mascots Albert and Alberta continued the pregame Two Bits tradition until 2013 when UF began inviting celebrities to perform the role. Errict Rhett was the first honorary Mr. Two Bits, and multiple Gator Greats have gone on to fill that role since, including Steve Spurrier, Danny Wuerffel, Cris Collinsworth, Lito Sheppard, Caeleb Dressel, Dara Torres, the 2006 and 2007 national champion men’s basketball teams and many other beloved Gators.

Gator Nation is encouraged to not miss the 2019 home opener on Sept. 7, as members of the Edmonson family will be teaming up to be the Gators ‘Celebrity Two Bits’ that evening.

The University Athletic Association is offering one free Mr. Two Bits commemorative t-shirt (pictured right) for every fan who purchases a ticket to the home opener via the link below by Monday, Aug. 12 at 11:59 p.m.  Fans will be asked for their t-shirt sizes upon checkout.