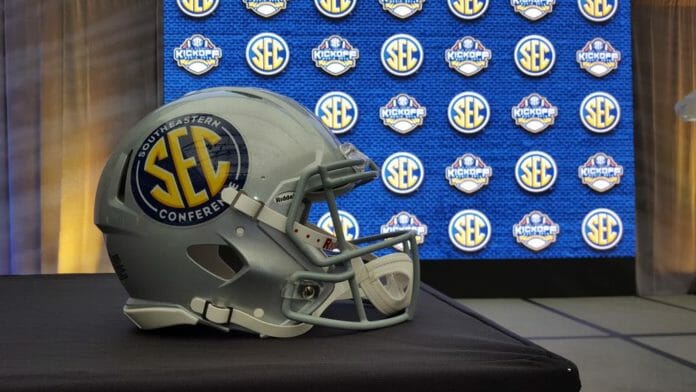 Georgia coach Kirby Smart gave mentor Nick Saban and Alabama a run for their money in the national championship game — and did it again in the offseason.Smart brought in the nation’s top recruiting class and stayed on point with Saban-like messages about guarding against complacency and embracing the pressure of high expectations while dismissing potential as “dormant ability.”

“We can’t allow complacency to slip into our program and slip into our staff because I know that will eat away at the core fundamentals that we started to believe,” Smart said during Southeastern Conference media days.

Clearly a sentiment Saban would endorse.

Alabama and defending SEC champion Georgia could very well be on a collision course for a championship again, though it’s more likely to be a meeting in the league title game this time. The Tide didn’t win the West last season after falling to Auburn in the regular-season finale.

The Crimson Tide approaches the season widely regarded as the favorite to win a sixth national title in the last decade. That overtime win over his former defensive coordinator’s team did leave Saban with a months-long quarterback controversy: Heralded championship game hero Tua Tagovailoa vs. two-year starter Jalen Hurts .

But neither mentor nor star pupil wanted their teams dwelling on that game or last season.

“We’re constantly looking for the next edge…” Smart said.

Saban’s message to his team: “Forget about what happened last year.”

The league welcomes five new head coaches, including Saban disciples Jimbo Fisher at Texas A&M and Jeremy Pruitt at Tennessee. Fisher returned to his SEC Western Division roots from Florida State after past stints at LSU and Auburn with a 10-year, $75 million deal .

The primary SEC West challenger to Alabama might be defending champion Auburn, which returns quarterback Jarrett Stidham and has one of the league’s most talented defensive lines. But Fisher’s Aggies return 15 starters and Mississippi State has 17 back.

South Carolina and Dan Mullen’s Florida seem the most likely to challenge Georgia in the East.

Some other things to know about the SEC in 2018:

East: Georgia. The clear division front-runner after making it to the brink of the Bulldogs’ first national title since 1980. Kirby Smart must replace tailbacks Nick Chubb and Sony Michel, along with linebacker Roquan Smith and six other defensive starters. Quarterback Jake Fromm is back after an impressive freshman season (presuming he faces down a challenge from five-star recruit Justin Fields ).

West: Alabama. With enviable quarterback options and strong front lines, the Tide remains the team to beat — even after a runner-up division finish to rival Auburn. The Tide defense must replace eight NFL draft picks and the entire starting secondary. Tailback Damien Harris is a stalwart in the offense.

Deandre Baker, CB, Georgia. Baker had nine pass breakups last season to go along with three interceptions, including one in the national championship game.

A.J. Brown, WR, Mississippi. Might have a hard time matching his huge 2017 numbers (75 catches, 1,252 yards, 11 touchdowns) if only because of QB Shea Patterson’s departure.

Raekwon Davis, DL, Alabama. Anchors the defensive line after racking up 8.5 sacks as a sophomore.

Deebo Samuel , WR/RS, South Carolina. Tied for the team lead in 2017 with six touchdowns — three receptions, one run, two kick returns — despite breaking his leg in the third game.

Montez Sweat, DE, Mississippi State. Tied for the league lead with both 10.5 sacks and 15.5 tackles for loss. The sack total was the highest by a Bulldogs player since 2005.

Devin White, LB, LSU. Led the league with 133 tackles and was SEC defensive player of the week four times.

ON THE HOT SEAT