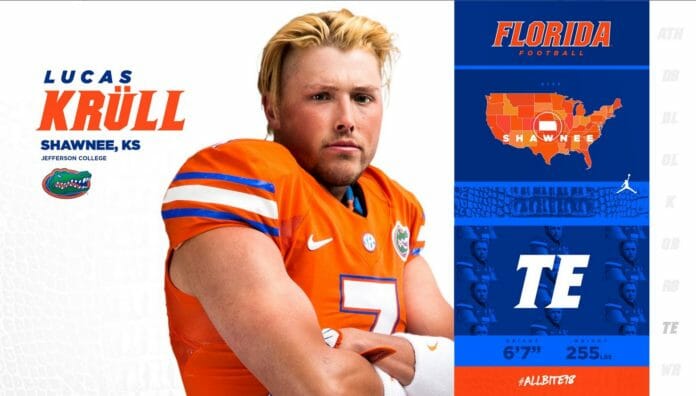 Florida made it official Wednesday, announcing junior college transfer Lucas Krull has joined the Gators as part of the 2018 recruiting class.

Krull, who enters this fall as a redshirt sophomore, is a 6-foot-7, 255-pound tight end who has not played football since 2015, his senior year in high school at Mill Valley in Kansas.

Krull spent this past year at Jefferson College in Missouri, where he played baseball. A pitcher, Krull appeared in 11 games and recorded 27 strikeouts while giving up only 10 hits.

Krull announced on Twitter earlier this month that he had committed to the Gators. He’s now officially on the roster.

Krull helped lead Mill Valley to the state championship in 2015, catching 52 passes for 745 yards and 13 touchdowns. He also rushed for 70 yards and a touchdown.

He chose Florida over Missouri, Maryland, Kansas State and SMU.

Big Chilling with my Lil’bro 6’7 250 TE @Lucas_Krull_ 1st day as a Gator. Great things coming from this dude. pic.twitter.com/xUf8D4j3Hq