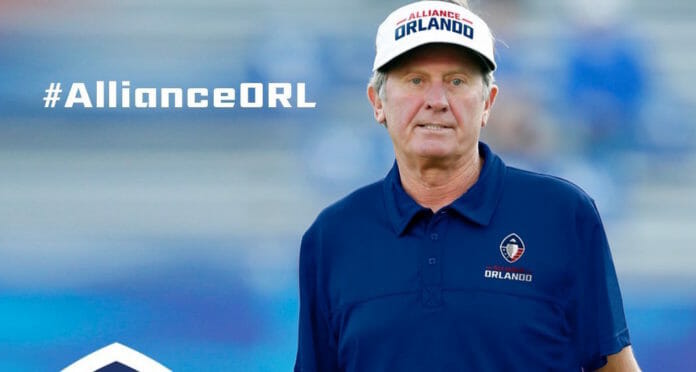 You kind of have to know Steve Spurrier to have heard it.

But it was there.

All the way from New York where the news broke on CBS This Morning.

How do you hear a glint in the eye?

You have to know Steve Spurrier.

“It’s the perfect situation for me,” he said. “We play 10 games, three playoff games. Hopefully we have a team good enough to make the playoffs.”

There, did you hear it?

And nothing makes him happier than anything where you keep score and award a trophy at the end.

Early Saturday morning, the new Alliance of American Football made a splash. It brought Spurrier to New York and onto the set of CBS This Morning to announce that he would be the league’s first coach.

The team will be based in Orlando.

And the league instantly gained credibility.

“It’s a challenge I needed,” he said. “Being an ambassador and consultant is nice and I appreciate everything the university has done for me. But I talked to (UF athletic director) Scott Stricklin and he knew I needed a challenge.”

He did. And talk about a perfect situation. The ambassador goes on a high-profile leave of absence and Florida still has him for speeches and fund-raising the rest of the year.

The truth is, his job at UF is only about a seven-month job anyway.

“I’m happy because he’s excited about it,” Stricklin said. “It seems like he’s a perfect fit. It’s not the 12-month grind of being a head coach. It’s a unique opportunity and he’s the perfect guy for something like this.”

He saw the glint when Spurrier came to talk to him about a leave of absence to coach some ball.

And Stricklin and everybody else in that athletic department knows that Spurrier on a football field is something that nobody would want to stand in the way of.

“I needed to do more than watch the Florida offense the last two years,” Spurrier said.

Watching how not to have an offense was part of the inspiration to get him back on the field.

But it’s so much more than that.

Well, some of it.

All the things he doesn’t miss are not a part of this new league.

“It’s so perfect because it’s 4½ months, it’s in Florida, (his wife) Jerri’s fired up,” Spurrier told The Sun. “If this hadn’t come up. I wouldn’t have coached again.”

He had been contacted about other coaching possibilities and turned them down. This one was right in his sweet spot.

The league will begin play the week after the Super Bowl and finish its season on the last weekend in April. It was founded by film producer Charlie Ebersol and Hall of Fame general manager Bill Polian.

The idea behind this league is the same one that other spring leagues have tried. The theory is that Americans want more football after the NFL goes to bed for the year.

But the other leagues have always messed it up by trying to compete with the NFL to drive TV ratings. I covered the USFL — where Spurrier coached for three years — and it was fun and exciting but it had bad ownership and an individual (you know who) driven to get into the NFL who brought it crumbling down.

I covered the World Football League and it was an absolute mess. I covered the American Football Association and one time the players couldn’t practice because their gear had been impounded.

So I know a lot about spring leagues. And so does Spurrier. If he’s convinced this will work, it probably will.

“They have a TV deal (with CBS), they have investors, owners who are willing to lose money for four or five years,” Spurrier said. “There is no minor league for professional football so hopefully we can help some guys get into the NFL.”

So now Gator fans have a new team to pay attention to. It will be interesting to see what former UF players and coaches will be on staff. Former UF director of football operations Jamie Speronis is already on board.

The glint is back.