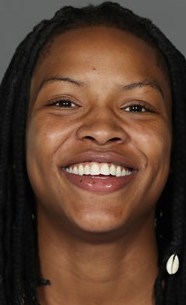 Delicia Washington’s layup with 2.2 seconds remaining Sunday helped the Florida women’s basketball team to a 58-56 win over Missouri at the O’Connell Center.

The Gators (5-12, 1-3 SEC) erased a 14-point deficit for their first league win of the season. They finished on a 10-0 run capped when Washington worked through three Missouri (14-4, 3-1) defenders for the game-winner.

“My coaches and my teammates believed in me,” Washington said. “Anybody could have been in that spot. I believe that any one of my teammates being able to finish that layup with that many seconds on the clock. So I guess it was just my turn to step up and be able to get to the rim and be able to put that score on that board.”

The Gators trailed 56-48 with 2:47 remaining, but forced Missouri into mistakes to snap a three-game skid. Florida outscored Missouri 22-11 in the final period.

“From an offensive standpoint, we had different people stepping up at different times and playing a possession at a time as opposed to playing the scoreboard,” UF coach Cam Newbauer said. “When you look at the scoreboard and you play the scoreboard, it creates so much anxiety that you feel like you have to do something great right now. Our players have done a great job at sticking with the process lately and really locking in with each other, and I think that’s what happened today. Overall, today was a great team effort, especially defensively and rebounding.”

UF featured four players in double figures, paced by Danielle Rainey, who erupted for a career-best 16 points while Washington finished with 11 points, nine rebounds and four assists. Kiki Smith, adding a double-digit point total for the third straight game, notched 10 and Zada Williams registered 10 of her own off the Gator bench.

After Missouri scored to make it 53-41 with 7:18 remaining in regulation, Florida had its backs up against the wall and the Tigers looked destined to leave Gainesville with their seventh-straight win. But Rainey, who drained five 3-pointers on the day, connected on a crucial one to bring the Gators back to within single digits and ignite what finished as a 17-3 run to close the game.