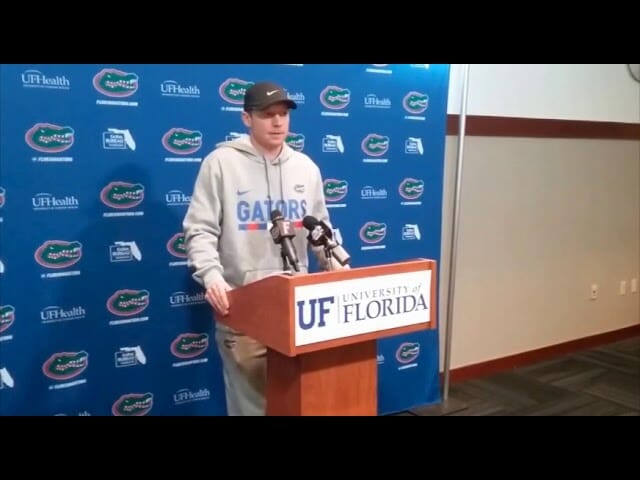 Through the first week-and-a-half of conference play, Florida finds itself alone in first place in a more competitive SEC.

But to Gator players and coaches, it’s not about how they start in the league, but how they finish.

“It feels good,” Florida senior guard Egor Koulechov said. “I know we’re not satisfied. We know we need to keep working, not let it get to our heads. Keep doing what we do.”

Florida (11-4, 3-0 SEC) won its fifth straight and remained unbeaten in league play with a dramatic 77-75 win at Missouri on Saturday decided on a steal and layup by senior point guard Chris Chiozza in the closing seconds. The Gators picked up two road league wins this past week — at Texas A&M and at Missouri — which could prove important to their resume come March.

“Being in first place three games into an 18-game schedule means nothing,” Florida coach Mike White said. “Feels good beating Missouri on the road, though. Really good team, and we had a really good week, obviously. Now, it’s back to work.”

The Gators will face Mississippi State at home Wednesday and could be without Chiozza, who was diagnosed with strep throat Monday and will sit out UF’s next two practices. Florida and Auburn (14-1, 2-0 SEC) are the only two teams that remain unbeaten in league play. Auburn became the seventh team from the league to crack the AP Top 25, debuting in the poll at No. 23 this week. Florida did not return to the Top 25, but was the second-leading team in receiving votes outside the Top 25.

Florida is averaging 77.6 points during its current five-game win streak after a rough December stretch that saw the Gators lose four of five games.

Led by junior guard Jalen Hudson’s 16 points off the bench, five different Florida players scored in double figures in the Missouri win. The Gators are getting more production inside from center Kevarrius Hayes and forward Keith Stone. Hayes scored a season-high 10 points against Missouri, while Stone is averaging 15.5 points and 5.5 rebounds over his last two games. White said playing Hayes closer to the basket in halfcourt sets has allowed the 6-foot-9 center to get more opportunities for baskets.

“We’re posting him more,” White said. “He’s playing more in his comfort zone and he’s made a big jump in his offensive development the past month and Keith Stone, again we saw it and saw it a bunch in practice and for him to do what he’s done two games in a row hopefully gives him some confidence.”

Florida will look to maintain its offensive momentum against a Mississippi State team that always plays tough defense under coach Ben Howland. The Bulldogs lead the SEC in scoring defense, allowing just 63.5 points per game.

“We’ve got a little bit of confidence, but we need to stay sharp, we don’t want to give one away,” Hudson said. “Obviously all these games are going to be one or two possessions so we’ve got to be really sharp down the stretch.”