The Back Nine comes at you after another weekend without sports unless you want to consider the six bucks you took off a buddy playing golf or virtual Connect Four worthy of coverage.

* “We’ll Be Alright” by Grace Potter.

* “Why We Ever” by Hayley Williams.

* And for an old one, “Ruby Tuesday” by The Rolling Stones. 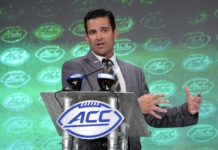 The Back Nine: Miami’s Diaz picks safe hand at quarterback