Three years ago Saturday, the University of Florida reached the pinnacle of the college baseball world, thanks in no small part to an eighth-inning outburst in Omaha.
On June 27, 2017, the Gators’ offense made sure to help secure the College World Series title over SEC rival LSU with four runs en route to a 6-1 victory in Game 2 over the Tigers for a finals sweep.
“I’m just kind of numb, to be honest with you,” Florida coach Kevin O’Sullivan told ESPN after the game. “I don’t know what to think. I’m running around. I’m thinking about a lot of things. I’m looking around, seeing all the happy faces and hugs. I’m just trying to soak it in.”
Carrying a 2-1 lead into the bottom of the eighth against the Tigers, the Gators’ Jonathan India led off the inning with a double into the left field corner and eventually scored when Nick Horvath was hit by a pitch with the bases loaded to put the Gators up 3-1.
Deacon Liput’s two-run single to center field during the very next at-bat pushed UF’s lead out to 5-1. JJ Schwarz added a sacrifice fly to make it a five-run contest at that point.
That fateful day, then-freshman Tyler Dyson tossed six innings of 3-hit ball, yielding just a single earned run.
While the Gators’ bats came through late on that fateful day, UF hit just .222 in Omaha that season, which was the lowest since USC in 1972.
Right-handed pitcher Alex Faedo, who played for the Double A Erie Sea Wolves in 2019 after being drafted in the first round by the Detroit Tigers in 2017, was Omaha’s most outstanding player for a pair of wins over TCU prior to the finals. Faedo is currently ranked as Detroit’s ninth-best minor league pitching prospect.
“We played to win tonight, not to get to Game 3,” Faedo said that night to ESPN. “Sully believed in us that we could get the job done.”
Jackson Kowar worked a scoreless ninth inning for his first career save. 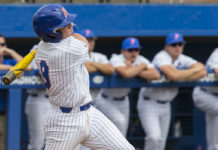