Dan Mullen’s first two seasons at the helm in Gainesville have restored many fans’ faith in the direction of the program.

Stumbling to a 4-7 record in the final year under Jim McElwain in 2017, the Gators won 10 games in Mullen’s inaugural campaign, followed by an 11-win season a year ago, the first for the program since 2012.

With the Southeastern Conference’s East Division perhaps wider open than any previous point in Mullen’s tenure, Florida is hoping to take that next step and contend for a College Football Playoff berth in 2020.

While some fresher faces will be counted on to play larger roles, the cupboard is far from bare. If the Gators are going to clinch their first CFP spot in the event’s seven-year history, the program’s seniors will likely be the driving force.

Here are some seniors who project to be among Florida’s most impactful players entering the 2020 season.

The most obvious inclusion on this list, Trask’s ability was a relative unknown a year ago.

Beginning the season as the backup to classmate Feleipe Franks, he was thrust into action was the former went down with a season-ending ankle dislocation against the Kentucky Wildcats in the third game of the 2019 campaign.

Able to hit the ground running, Trask piloted the Gators to an 8-2 record in his 10 starts, with the two losses coming to the eventual national champion LSU Tigers and Georgia Bulldogs.

Keeping Florida in games by taking care of the football, Trask threw 25 touchdown passes as a redshirt junior, compared to just seven interceptions.

With LSU’s Joe Burrow, Georgia’s Jake Fromm and Alabama’s Tua Tagovailoa off to the National Football League, Trask could establish himself as one of the conference’s best signal-callers in 2020.

Setting or tying career-highs in tackles (39), tackles for loss (four), forced fumbles (one) and fumble recoveries (one) in 2019, Campbell projects as the leader on the coach David Turner’s defensive line in 2020.

Redshirt junior Elijah Conliffe and redshirt freshman Jaelin Humphries are waiting in the wings to take over following Campbell’s graduation, but they still have one more season to soak in all the knowledge and technique they can from him.

A product of the powerhouse St. Thomas Aquinas in Fort Lauderdale, Grimes initially began his collegiate career in Columbus with the Ohio State Buckeyes.

Transferring back to his home state after one year with the Buckeyes, he was granted immediate eligibility in 2018 and caught 26 passes for 364 yards (14 avg) and two touchdowns. Last season, he upped his production to 33 receptions, 491 yards (14.9 avg) and three scores.

Joining junior tight end Kyle Pitts, Grimes is one of only two of the Gators’ top-six pass-catchers in 2019 returning this fall.

Having the chance to be a team’s No. 1 wide receiver for the first time since his high school days, Grimes posting production like Van Jefferson a year ago would go a long way toward Florida’s CFP push.

Considering entering the 2020 NFL Draft, Davis elected to return and run it back one more time in Gainesville.

After failing to register an interception in his first two seasons, Davis picked off opposing quarterbacks three times in 2019, including a one-handed snag of a pass from Auburn’s Bo Nix, one of last season’s best interceptions in all of college football.

Also capable of playing in the box and stopping the run, he recorded a career-high 51 tackles last year, more than double his 2018 output of 22.

Classmates Brad Stewart and Donovan Stiner also project to see plenty of action at safety in 2020, providing defensive coordinator Todd Grantham and position coach Ron English with loads of experience on the back-end.

The Gators return four of their five starters on the offensive line in 2020, with center Nick Buchanan being the lone departure. This group was also bolstered further by the addition of Mississippi State Bulldogs graduate transfer Stewart Reese earlier in May.

Heggie started all 12 games he played in a year ago, appearing at both guard spots. With the graduation of Buchanan, many experts expect him to move to the middle and fill that void this year.

Florida’s offensive line was not great in 2019, but continuity is often the key with this position group. Heggie’s previous starting experience, combined with his versatility to play all over the line, make him one of the team’s most important seniors in 2020.

A mammoth body on the inside at a listed 6-foot-5 and 358 pounds, Slaton is projected to play alongside Campbell in 2020 and inherit the role filled by Shuler last season.

Another senior, Marlon Dunlap, will likely spell Slaton at times, but look for the American Heritage (Fort Lauderdale) product to continue his ascent and his cement his status as one of college football’s five best interior defensive linemen this fall.

Check out more Gator coverage at Gators Wire, a part of USA Today Sports and Gannett, which owns Gatorsports.com. College Wires is a digital sports initiative that is part of the USA TODAY Sports Network that brings fans closer to their favorite college sports teams. The websites are full of aggregated content and original stories that has become a daily destination for hard core supporters of these successful college sports programs. 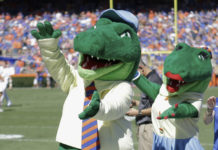