GatorSports.com
Facebook
Twitter
Pinterest
WhatsApp
When Cam Newbauer left a strong Belmont team to take on a new rebuilding project at Florida, it was understood that it would take some time.
The coach’s Belmont team didn’t truly break out until its third year under Newbauer with 24 wins and an NCAA Tournament berth.
Having just completed his third season at the helm of the Gators women’s basketball team, the 2019-20 Florida squad saw a sizable jump in the win column and truly appears to be a program trending in the right direction.
The Gators went from 8-23 the year before to a 15-15 record in their latest season before the remainder of the campaign was wiped out due to the coronavirus pandemic.
While Florida might not have been in line for an NCAA Tournament bid, the Gators seemed in line to return to the postseason via the Women’s NIT.
Also, when you have the nation’s top team in South Carolina in your conference, along with four other ranked teams — Mississippi State, Kentucky, Texas A&amp;M and Arkansas — it’s going to take some time to right the ship.
Still, the Gators beat a pair of Top 25 teams in 2019-20 in Kentucky and Arkansas, teams they’d lost to the first time around in SEC play. They nearly doubled their overall win total and did double their conference wins from three to six. They also had three conference losses that were two-point games late in the contest, showing another level of competitiveness that was missing the previous season.
“We definitely showed progress this year,” Newbauer said. “We showed we can recruit high-level athletes.”
Picking up Lavender Briggs out of Provo, Utah, was the first sign the Gators’ recruiting pull was increasing. As a true freshman, the 6-foot-1 guard Briggs led UF in scoring at 15 points per game and was the first future Gator to play in the Jordan Brand Classic as a five-star recruit coming out of high school.
With 6-foot-2 forward Jordyn Merritt from Plano, Texas, enrolling in the fall, this will be the first time since 2012 and 2013 that the Gators have back-to-back five-star recruits coming to campus.
When you’re building a program basically from scratch, there has to be some level of patience. Newbauer himself trusts “the process” and also preaches it to his players.
“You’ve got to be patient with the process, even when the process sucks and it’s hard, it’s what gets you there,” Newbauer said. “It takes a relentless pursuit. You’ve got to be patient, you’ve got to be relentless, you’ve got to be enthusiastic.”
One player who played through that tough 2018-19 campaign and came out better on the other side was redshirt junior guard Kiara “Kiki” Smith. The 5-foot-10 guard transferred from ASA College in New York and saw her scoring average increase from 7.1 points per game to 11.9, good enough to be the Gators’ second-leading scorer behind Briggs.
Smith credited the relationship she forged through phone calls with Newbauer and associate head coach Kelly Rae Finley before she visited Florida’s campus as a large part of why she ended up as a Gator.
“Me and coach Cam, we have a really great relationship,” Smith said. “What I really like about him is he takes my opinion to the table and he takes it into account. He doesn’t shoot it down right there.”
With new recruits incoming and returning five of its six top scorers, it’s possible for Florida women’s basketball to take another step forward under Newbauer.
Yet, for the head coach, it goes back to doing the little things right to accomplish those bigger goals down the road.
“Talking about our players and how our players want Florida basketball to be something it’s never been,” Newbauer said. “Their investment is incredible right now.” 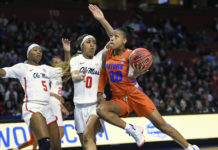