In hindsight, Florida’s second Junior Day, which featured a full slate of highly recruited prospects in the 2021 class on campus last weekend, was even more critical to the program’s recruiting than it initially appeared.

With officials continuing to monitor the coronavirus pandemic, which has already forced the suspension or outright cancellation of numerous sporting events across the country, the NCAA took action Friday in regards to recruiting by suspending all on-and-off campus recruiting until April 15.

The announcement comes after the Southeastern Conference took action Thursday in regards to recruiting, although the league had a slightly optimistic outlook at the time.

After the cancellation of the SEC Tournament and suspension of on-campus events through March 30, league commissioner Greg Sankey announced the conference would also suspend both on-campus and off-campus recruiting through at least March 30th. Sankey initially hoped on-campus recruiting may return March 31, but he noted officials are still monitoring the situation and may extend the suspension even further – a decision that ultimately took less than 24 hours to make on a national scale.

When it comes to spring practice, Sankey is leaving that decision up to the program, and the Gators are closing the doors and pressing forward, but anymore Junior Days, unofficial or official visits are off the table right now, meaning the recruiting hiatus throws a wrench into the plans of five-star running back Zachary Evans.

To recap, the Houston native, ranked the No. 2 running back and No. 16 overall prospect in the 2020 class in 247Sports’ composite ranking, initially signed with Georgia over LSU and Texas A&M in the early signing period, only to reportedly request a release from his letter of intent – a move that prohibited him from signing another letter of intent this cycle.

However, that apparently won’t keep him off the field in 2020.

Evans has looked around the SEC since then, with Ole Miss and Tennessee remaining options, although Florida has looked like the team to beat after the Gators didn’t sign a running back in the 2020 class.

For now, those plans are off the table. While no date has been set, the Gators plan on hosting Evans as soon as it’s permitted, preferably in April.

Plenty could change by then, but at least someone in the know predicts one of the more unpredictable recruits in recent history ends up in Gainesville. Mike Farrell, the national recruiting director for Rivals.com, said he’s “not sure what happens now” in response to a Florida fan’s question on Twitter about Evan’s up-in-the-air visit plans, but added “he’ll still end up” with the Gators.

The NCAA’s decision also eliminates two potential recruiting weekends on Florida’s calendar, as April 1 should have marked the first opportunity for 2021 prospects to take official visits.

It also calls into question whether the evaluation date will change. The evaluation period, where coaches are precluded from talking to prospects off-campus, is currently set to run from April 15 until May 31. Prospects can still visit programs during that time period, but it remains to be seen if that, too, may change considering the unpredictable situation at hand.

Earlier, Farrell made another recruiting prediction in regards to the increasingly unpredictable situation.

“Recruiting will continue, people, just not in person,” he said. “But this will slide the regular recruiting calendar back quite a bit, and I can see the NCAA going to one Signing Day again for this cycle if it continues for an extended period of time.”

Dooley: X Factors of the SEC 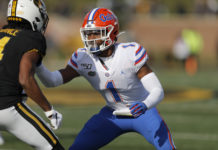