“I’m really pleased with them,” he said. “They’ve done a good job. Everybody is in pretty good shape. One of the things I told all of them before they got here, I don’t care how much you lift weights. I could care less whether you can lift 400 pounds or 100 pounds. I just care that you’re in good physical condition so that you can do the workout.

“They’ve done a great job with that. They’ve finished every workout. We had mat drills this morning, and you wouldn’t have been able to say that guy is a freshman that just got here, so I’m really pleased with how they’ve done that.

“We’ve got a couple more weeks of that and then we’ll get into spring ball to see how it translates to football. But I’m really pleased with all of them so far.”

Don’t sleep on them

Mullen has named two potential sleepers in the recruiting class — cornerback Tre’Vez Johnson and defensive tackle Lamar Goods, one of the early enrollees.

“Tre’Vez Johnson is a guy I said right from the beginning that some people might sleep on,” Mullen said. “Lamar Goods, I’m really excited to have him. I’ve seen him really progress since he’s been on campus. Those are a couple of guys who jump out to me.

“Generally speaking, if you see a guy, most of the times that we recruited that might not have all the stars or accolades, those are probably the guys that I would say, we saw something in them. That’s what got them here.”

Instead of possibly shifting his coaching staff around, Mullen said he plans to replace tight ends coach Larry Scott with another tight ends coach, but that might shift some responsibilities on the staff.

“We might shift a bit, shift certain duties around, but we’ll probably hire a tight ends coach,” he said. “Or a guy that’s more of a background with tight ends. But if we shift out, we might shift some — in the next couple weeks I might have some stuff that I’m going to shift certain duties around on our staff of what they’re doing besides their actual just (position stuff).”

Mullen also will be hiring two or three analysts to his staff in the coming weeks. There has been speculation about former UF quarterback Kerwin Bell and former UF defensive coordinator Charlie Strong, but Mullen has not offered anyone a job yet.

“We haven’t hired anybody yet,” Mullen said. “I usually wait until after signing day because a lot of times everybody is — they’re looking for on-the-field full-time position jobs. I don’t want to hire a guy and then he leaves a week later. But we have a list of candidates. We’re not going to hire all of them, but we’re going to have a couple that will probably join our staff in the next couple weeks.”

“As everybody that called me, I know he will do an amazing job, not just on the field but off the field as a leader and he’ll help lift up that program. I talked to several coaches about him and said, he is a guy that you want in your program. He’s a guy that will help lead in the off-season and raise the bar for everybody and work his tail off. I’m happy for him.”

UF will be applying to the NCAA for special waivers that would make the three transfers — running back Lorenzo Lingard, wide receiver Justin Shorter and wide receiver Jordan Pouncey — eligible for the 2020 season.

“We’re going to start them now,” Mullen said. “I know in compliance they’ve got a lot of things going on. When you deal with that, it’s a long time from now that we need to, so we’ll start the process, and usually we kind of go one at a time with those guys to see how it all goes.”

Wide receiver Xzavier Henderson is the brother of former UF cornerback CJ Henderson. But because CJ left early for the NFL draft, there won’t be any match-ups between brothers in practice. But Mullen seems to have an idea who would win that one.

“Well, his brother has probably got a little more technique on him right now, but I think it would be interesting, because with Xzavier the one thing you see when you put him next to CJ, he’s bigger than his brother,” Mullen said of the 6-foot-4 Xzavier. “And he’s still in high school. He hasn’t been through the program developing yet.

“He’s an elite track guy, so I think he’s got the potential. Once we coach him up a little bit, I don’t know, I might have to go with Xzavier. Because of the physical tools, he might win that battle with physical tools.” 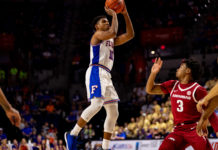