Ponte Vedra Beach — Florida golf coach J.C. Deacon didn’t get the team result he wanted Tuesday in the final round of the Sea Best Invitational.

But he also didn’t see anything to dampen his enthusiasm for the coming spring season.

The Gators locked up with Texas A&M in in a day-long battle at the TPC Sawgrass Dye’s Valley course, but it was how the Aggies closed and UF didn’t that made the difference.

Texas A&M’s five starters played the final three holes at 2-over par, with three birdies, while the Gators were 4-over with two birdies. That two-stroke difference was also the final margin as the Aggies finished 13-under-par 827, with the Gators coming in at 11-under 829.

Florida swept the top-two spots on the individual leaderboard as freshman Ricky Castillo turned in a bogey-free 65 to beat junior teammate John Axelsen (68) by two shots at 8-under 202. It was the Gators’ first individual title since Andy Zhang won an NCAA regional in 2018.

However, the Gators didn’t place another player until Chris Nido, who tied for 32nd. Texas A&M had all five players among the top-20, led by Walker Lee (68) and William Paysse (72) in a tie for third and Dan Erickson (68) in a tie for eighth.

“We played pretty good, but Texas A&M finished strong and we didn’t,” Deacon said. “But it was a good step in the right direction.”

Maybe more than one step. Florida shot double-digits under par in a team event for the first time since a tournament in Dallas in the fall of 2019, a span of 13 events. It was only the second time since then that the Gators were under-par by any score.

UF was a cumulative 67-over par in four fall tournaments.

“We proved that we’re a much better team than that,” said Castillo, who put scant pressure on his putter by making his five birdie putts on rolls of 8 feet or less.

Deacon said Castillo’s performance was a sign of things to come for the California product and two-time AJGA All-American.

“He is so competitive and works so hard,” Deacon said. “He’s learned a lot of hard lessons and for a freshman to make no bogeys on this course, in a final round, says it all.” 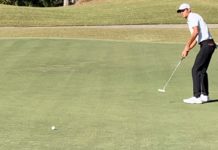 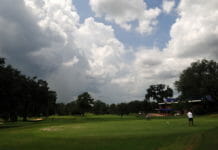