GatorSports.com
Facebook
Twitter
Pinterest
WhatsApp
Who: Vanderbilt (9-15, 1-10 SEC) vs. Florida (15-9, 7-4)
When: 8 tonight
Where: O’Connell Center
TV: SEC Network
Radio: 103.7-FM, AM-850
The Florida men’s basketball team’s 8 p.m. match-up with Vanderbilt has been circled on the calendars of Florida fans for months — for good reason, too.
Florida will honor former head coach Billy Donovan during halftime of Saturday’s contest as part of a unanimous decision to name the basketball court after the man who spent 19 seasons in Gainesville raising the bar of Florida’s basketball program.
“I think it will be great for our fans, for all of the people that worked with Billy, that played for Billy,” Donovan’s successor, Mike White, said. “All the people that come back just for the event, I think, will be awesome.”
White said he had a chance to catch up with his predecessor prior to Friday’s practice session — an occasion he couldn’t pass up. However, that’s where the celebration likely ended for White, whose primary focus is helping guide Florida into the postseason.
After securing a 17-point win at Texas A&amp;M — a game which saw Florida’s sophomore trio score 55 of the team’s 78 points — the Gators (15-9, 7-4 SEC) are riding high heading into the second match-up in as many weeks with the Commodores, yet know they can’t afford to take Vanderbilt (9-15, 1-10 SEC) lightly.
“For this current team, we’re on Vandy. We’re just focused on Vandy, we’re focusing on a good practice (Friday),” White said. “Because that’s what it’s going to take. Vandy, every team in our league demands your respect and your attention. They’re playing as well as they’ve played all year. We’ve got a big game ahead of us tomorrow.”
Florida received a confidence boost just before tip-off when starting point guard Andrew Nembhard was declared active after missing the previous two practices with a minor ankle injury sustained in UF’s loss at Ole Miss four days prior. If the injury was as serious as it initially looked, Nembhard didn’t let it show Wednesday; the native of Aurora, Canada, scored a game-high 24 points, dished five assists and didn’t miss a shot from inside the arc while playing his typical minutes.
Impressive to the outside world, perhaps, but nothing out of the ordinary in the eyes of Nembhard’s teammates, who have seen their point guard battle through a variety of ailments while playing in every game since he’s been at Florida.
“I knew he was going to play, even right after the game when he got hurt,” Noah Locke, who also has played in all 60 games alongside Nembhard since the two arrived at UF, said. “He’s a tough guy, he wants to play and he played well.”
Locke may have expected it, but that didn’t mean Nembhard’s availability was a guarantee by any means — nor did it mean the sophomore point guard felt like a beacon of health throughout the night. Regardless, his effort didn’t go unnoticed by his fellow teammates; now, with a decisive seven-game stretch set to determine whether Florida makes the NCAA Tournament or not, the Gators are hoping said observations further contribute to the team’s continued improvement.
&quot;He’s someone that really steps up to the plate for us. As our leader, he doesn’t want to take games off, he hates taking practices off just like any of us, for sure. He knows that when he was out the first two days of practice before, he was kind of being a plus for Coach White on the sideline, coaching us up and walking our point guards and putting people in the right spot, being the floor general like he naturally is,” freshman Scottie Lewis said. “So, we all knew in our heads that he wasn’t going to not play that game. And obviously, (it led to) him having his biggest plus-minus, he was +25 that game, so maybe he should take some more days off before games.”

Notes: The Gators have won three in a row overall vs. Vandy and four of the last five meetings … UF welcomes back future Hall of Fame coach Billy Donovan for the naming of Billy Donovan Court. Donovan recorded two national championships, four Final Fours, six SEC championships and 467 wins in his 19 seasons leading the Florida program … The Gators come into the game off a stellar shooting performance at Texas A&M where Florida hit a season-high 12 triples on 27 attempts, while protecting the glass with 14 offensive rebounds vs. TAMU’s 11 defensive boards … Florida played the toughest non-conference slate of any SEC team for the fourth time in five years under Mike White, according to KenPom (3rd in 2017-18). 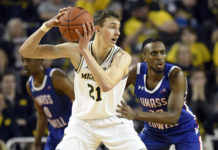