The host Wildcats have won five in a row and stand alone atop the standings with a two-game edge on Florida, Auburn and LSU — the latter two of which have lost consecutive games.

Meanwhile, Florida has regrouped from a 17-point loss at Mississippi to win its last three by an average margin of 16.3 points. The Gators have won five of six overall since a three-game slide and look to bolster their quest to earn one of the top four seeds and a double bye for next month’s conference tournament in Nashville.

Kentucky has won the past two matchups since dropping three of four. The schools will meet again on March 7 in the regular-season finale in Gainesville. 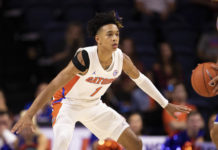