GatorSports.com
Facebook
Twitter
Pinterest
WhatsApp
Weekend baseball
Who: No. 2 Florida (5-0) vs. No. 1 Miami (4-0)
When: 7 p.m. today, 7 p.m. Saturday, 1 p.m. Sunday
Where: Alex Rodriguez Park at Mark Light Field, Coral Gables
Radio: AM-850, 98.1-FM
Online: All three games will stream live via ACC Network Extra.
On mound: UM will throw redshirt senior right-hander Brian Van Belle (1-0, 0.00 ERA) vs. UF junior right-hander Tommy Mace (1-0, 3.00) in the series opener.
Florida vs. Miami in baseball is always big. But this weekend’s series between the two rivals in Coral Gables is bigger than most. It’s a match-up of No. 1 in the nation, the Hurricanes, against No. 2, the Gators.
“It’s going to be a fun one,” UF sophomore outfielder Jud Fabian said. “Last year’s Miami series was really fun because we lost Friday night and came back and won the two games on Saturday and Sunday to take the series. It was fun here and I can only imagine what it’s going to be like down there, especially with the rankings that are out.”
Speaking of those rankings, UF coach Kevin O’Sullivan is downplaying the No. 1 vs. No. 2 angle heading into tonight’s opener of the sold out three-game set.
“I haven’t said anything to them (about it),” O’Sullivan said. “We’ve been there before. We’ve been a program that has gone to Omaha more than any team has in the last decade.
“But I don’t want to make the weekend bigger than it is. I mean, it is what it is. If you play great, it really has no bearing on how you’re going to play in June. And if you play poorly, it has no bearing on that either.”
The Gators enter the series with a 5-0 record after beating JU 4-3 Wednesday night in 10 innings. True freshman Isacc Nunez’s RBI-single was the game winner for UF.
“The biggest focus for us right now is for us to try to continue to get better, figure out our roles and try to be better by Sunday night,” O’Sullivan said. “It’s really that simple.
“Of course, it’s going to be challenging. It’s good that we’re playing a really good, quality opponent in Miami. It’s a rival game and it’s good for both programs to be involved in that right now.
“But as far as the rankings are concerned, it’s so early in the year, it really doesn’t matter to me. It doesn’t matter where you’re ranked. My only concern is we need to get better.”
The Gators clearly have momentum entering the series with Miami. But then so do the Hurricanes, who are 4-0 and coming off a 12-0 pounding of Kent State on Wednesday night.
“The atmosphere is similar to a regional or a super regional,” Hurricanes coach Gino DiMare told the school’s website. “I think it’s going to be a great series. I think it’s going to be excellent for college baseball. … It’ll be electric. I know our guys will be ready to play.” 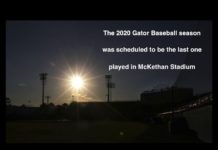