AUBURN, Ala. – The Florida swimming and diving program put on a show over five days of competition at the SEC Championships in the James E. Martin Aquatics Center. The Gators won their eighth consecutive championship, while the UF women finished second.

“I am incredibly proud of our men,” UF coach Anthony Nesty said. “What they accomplished this week was nothing short of exemplary. Each one of them competed with the greatest heart and tenacity.  Every man did their job and they executed as a committed and focused unit.

“This championship is extremely challenging physically due to the length of days in the competition itself.  Every team wants the prize and are equally hungry. This week, the Gators earned this championship and did so decisively. It was very rewarding to see their hard work has rewards.”

The Tennessee women earned their first SEC title with a final score of 1,108 points. Florida came in second with 1,079.5 points.

The Commissioner’s Trophy, which is awarded to the student-athletes who score the most individual points at the championships, went to Erika Brown of Tennessee for the women and Zane Waddell of Alabama and Shaine Casas of Texas A&M for the men.

The Gators won the 2020 championship with 15 medals – five gold, three silver and six bronze, as well as five event titles- four individual and one relay.

A pair of Gators etched their names in the history books as Kieran Smith and Robert Finke both set new American records during the week to help them claim event titles.

Smith shattered the 500 Free previous American record with a time of 4:06.32, almost a full second faster than the previous top swim and broke and the previous NCAA mark by almost two full seconds.

Finke set the fastest mile swim in American history on Saturday night. He would touch in 14:12.08, six full seconds faster than the previous fastest time ever recorded.

Florida’s 800 free relay won its eighth-straight crown on the first day of swimming on Tuesday with a new SEC and pool record time of 6:09.91, beating a mark set last year by the Gators in Athens, Ga. by .59 seconds. To leadoff the relay, Smith clocked the fastest 200 free spilt in SEC and Florida history of 1:30.31.

Day four Friday
With only a combination of seven swims between the morning and afternoon, Florida took full advantage, sending four to an A-final on Friday night. Dillon Hillis led the way after securing his first career SEC podium appearance with a third-place finish in the 100 breast.

Florida capped the night off with another relay medal, this time coming in the 400 medley by Clark Beach, Hillis, Smith and Will Davis. The relay finished in second with the eighth-fastest time in program history.

Day five Saturday
Bobby Finke got things started with a new American record in the 1,650 free, smashing the previous-best by six full second. He would finish in 14:12.08 to claim a SEC title and become the fastest American in history.

Florida would go on to claim three more medals on the final day to close things out with a silver by Clark Beach (200 back) and a trio of bronze medals by Gravley (1,650 free) Smith (100 free) and Sanders (200 breast).

“I want to thank our Administration and support staff for their loyal and earnest dedication to our programs and these athletes,” Nesty said. “We must now focus our attention on the NCAA Championships. We still have work to do.  The season is not over yet. I am honored to coach these young men and I care very much about each and every one of them.”

Florida swimmers will get a full month off before their next competition – the NCAA Championships. The meet will take place from March 25-28 in Indianapolis, Ind.

The divers will be back in action at NCAA Diving Zones, beginning on March 9.

Florida’s women earned a second-place finish after falling short by just 28.5 points. The Gators finished in second place for consecutive years after a runner-up bid last season, which marked the first time UF has posted back-to-back top-two conference finishes since 2011 and 2012.

In total, Gator swimmers and divers reeled in seven medals (six individual and one relay) throughout their five days in Auburn.

Whitner was one of two platform finalists for the Florida in Saturday evening’s session. She would earn the first conference podium stop of her career with a second-place effort of 285.45, besting her previous best set in the prelims (250.60).

Braswell got the evening started in the 1,650 free with a bronze medal. She would produce a time of 15:54.54 to earn her first medal of the competition. Last year at SEC’s, she would set the fifth-fastest swim in school history in the event en route to an event title.

For the third time this week, Sherridon Dressel produced a lifetime-best in an event final. On Saturday night, she finished fourth with a personal-best time of 1:50.93, moving her up to the fourth-fastest time in school history.

To end the meet, the 400 free relay of Bella Garofalo, Dressel, Gabby Hillis and Talia Bates would produce the third-fastest time in school history, touching in 3:12.79. The time was just .50 seconds from earning a stop to the podium and earned the group an A-cut.

“I’m super proud of our women and the way they battled all week long to come up just 28 points shy of winning,” UF coach Jeff Poppell said. “It was truly a team effort with all 22 of our athletes contributing throughout the week. No one really gave us a chance heading into the meet but our team believed we could win. We just ran out of gas a little this evening.

“I’d like to thank coaches Whitney Hite and Bryan Gillooly and all of our support staff for their efforts this week. They did a phenomenal job. I feel truly blessed to work with such great individuals. Now we turn our focus to the NCAA Championships in Athens, GA in just under four weeks.“ 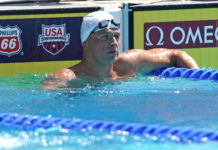 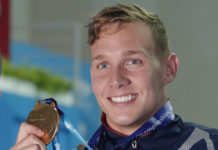 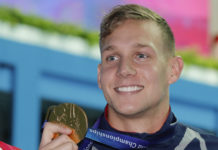