GatorSports.com
Facebook
Twitter
Pinterest
WhatsApp
By Jim Harvin, Correspondent
A roster loaded with talent and a season packed with possibilities await the 2020 Florida gymnastics team.
The Gators, ranked No. 3 in the Women’s Collegiate Gymnastics Association preseason poll, get things started today by hosting Southeastern Conference foe and 19th-ranked Arkansas in the Exactech Arena at the O’Connell Center at 6:45 p.m.
“When you speak to the team members you can just feel the excitement in their voice and their attitude,” UF coach Jenny Rowland said. “It really is an exciting time to be a Gator.”
UF, which won the 2019 SEC regular-season title, set a home attendance record by drawing an average of 8,333 fans for each meet.
The Gators return six gymnasts with 17 All-America honors — Alyssa Baumann, Rachel Gowey, Amelia Hundley, Savannah Schoenherr, Megan Skaggs and Trinity Thomas.
All in all, 13 student-athletes return, including Jazmyn Foberg, Maegan Chant, Nya Reed, Sydney Johnson-Scharpf, Leah Clapper, Sierra Alexander and Halley Taylor.
Payton Richards is the lone freshman, rounding out the 14-member roster.
“We’ve been preparing for months,” Gowey noted. “I really think myself and the three other seniors are ready to come out here and bring the team along as we advance through the season.”
Thomas, the reigning SEC Freshman of the Year, led the Gators with 26 event titles last season as a 17-year-old en route to earning five All-America honors.
She was named the WCGA Gymnast of the Year, becoming the fifth UF student-athlete to claim that honor but only the second to win it as a freshman.
Thomas also is the only current member of the U.S. Senior National Team on a 2020 NCAA roster.
“We’re so excited,” Thomas said. “We’re just going to look for our baseline to see where we’re going to start. We look really good in the gym and we’re ready. We can’t wait to see how this week goes.”
Tonight marks the first of 10 regular-season dates, nine of them dual meets. Seven of those will be against the other SEC teams, with the last two at Penn State (March 7) and home against Texas Woman’s University (March 13).
In addition, there is a tri-meet with No. 7 Denver and No. 20 Iowa State slated for the O’Dome on Feb. 7.
Home highlights include a meet with No. 2 LSU on Jan. 24 that will be televised by ESPN2 and the popular Link to Pink meet celebrating breast cancer awareness with No. 10 Alabama on Feb. 21.
A road trip to rival Georgia Feb. 28 tops the away slate.
The SEC Championships are set for March 21, with NCAA Regionals beginning April 2-4. The NCAA Semifinals (two sections) will be televised by ESPN2 on April 17, with the team final slated for April 18 to be televised by ABC.
Oklahoma is the defending national champion.
“This is a well-seasoned team compared to last year,” Rowland said. “I am so excited to see the personal growth and team growth that’s happened over the last eight months. I think it’s really going to show out on the competition floor.
“This team is ready. We haven’t been more ready in a long time. I’m just excited to take the next step in this process and get in front of Gator Nation, which this team enjoys doing.”
Rowland will again have the services of assistant coaches Adrian Burde and Owen Field as well as volunteer assistant Jeremy Miranda.
Brittany Arlington is Rowland’s assistant, with athletic trainer Janet Taylor and program coordinator Lee Turner rounding out her staff. 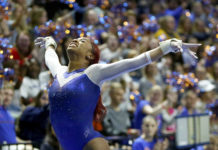 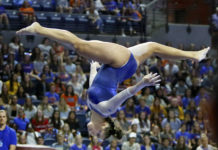 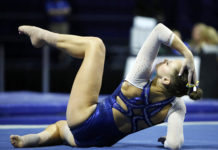