Omar Payne didn’t really see this coming. Heck, he didn’t expect to be a starter this season.

“I just came here to learn from (Kerry Blackshear Jr.)” said the freshman center. “I came here to be his back-up.”

Instead, Payne has found his way to be a starter for the Florida basketball team and on a day that was louder than a third-grader’s birthday party, he was the key to a Florida win that was its best of the season.

OK, so Auburn already lost a game this week and won’t be a top-10 team when the next poll comes out Monday.

But it was still a huge win over a team ranked fourth for another day or so.

And it was Payne who had the game of his life, however brief it has been as a college basketball player.

Blackshear did his part as well with 11 points and 16 rebounds in Florida’s 69-47 blowout-at-the-end win over the Tigers. But it was Payne who took advantage of a team that’s not been easy to take advantage of.

Yes, Auburn lost a lot of good players from a Final Four team, but coach Bruce Pearl’s team wasn’t ranked where it was based on last season. In fact, the Tigers almost were reluctantly put that high because of a soft non-conference schedule that helped them get to 15-0.

But as we saw in this game Saturday, Auburn has a major flaw and that is underneath the basket. And when you can throw two talented big men at Auburn, it’s going to require a high level of shot-making for Aubie to win tough games in a tough league.

Payne took advantage of that Saturday with 19 points and 11 rebounds. While Auburn was trying to keep Blackshear out of the paint, Payne was grabbing seven offensive rebounds.

“They usually try to double-team me (on rebounds),” Payne said. “They only put one guy to try to box me out. So it was easier for me to swim in there and get the rebound.”

The plan wasn’t necessarily to lean on Payne against a team that came in with the second-best rebounding margin in the conference. It certainly wasn’t the plan to play him 32 minutes.

But Payne got into a flow and he flooded Auburn right out of town.

“They were breaking us down so often off the dribble,” Pearl said, “and Omar was cleaning up a lot.”

Payne came to Florida as a bit of an afterthought in a recruiting class that included two McDonald’s All-Americans. He didn’t really have much of an offensive game and admitted he didn’t have the skills to put back the kind of shots he did Saturday when he first arrived at Florida.

But the thirst for knowledge has been there since he stepped on campus.

“He’s had a very serious approach.”

Certainly, nobody in the sellout crowd of 10,756 came into the O-Dome on Saturday thinking the star of the game would be Omar Payne, who came in averaging four points and four rebounds a game. (Obviously, Auburn did not).

“That’s the luxury of having all of the good players we have,” said Blackshear. “You take me away, we have other guys.”

It was important for Florida (12-5, 4-1 in the SEC) to play from ahead and Payne got them started the right way with two tip-ins and a kick-out to Noah Locke for a 3 and a 7-0 lead.

His start certainly lit a fuse under the crowd and his team. And from there, Florida pretty much had control of the game, only allowing Auburn (15-2, 3-2) to tie it once early at 15 and never trailing.

There were plenty of heroes and there usually are after an important win.

Andrew Nembhard fought off the flu that kept him from practicing and also forced his roommates to move out while their place was disinfected.

He was the field general without gaudy stats.

“We rode Andrew a lot off ball screens and he was really good,” said White.

Locke hit three triples to extend his streak for multiple 3s in a game to 14. Blackshear dominated the boards in the first half. Keyontae Johnson played more as a three than a four and eight points, four rebounds and two steals despite early foul trouble.

But mostly, this team played defense. It helps when the other team is off and Auburn was off to the tune of 25.5-percent shooting. Florida’s defense had a lot to do with it.

It was Auburn’s fourth lowest point total in the Pearl Era. The Tigers couldn’t make anything. And Payne (9-for-9) could not miss.

“Just another game,” he said.

Naw, it was more than that. It was CBS and a blackout and a crowd in a frenzy.

And it might be a glimpse at what we might see down the road from this team.

“I guess it shows you that we’re pretty good,” White said. “What we’re potentially capable of. When we’re hitting on all cylinders, we can beat a Top-10 team.”

That much we know. Now. 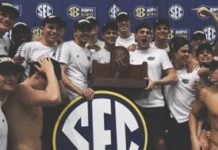