FORT LAUDERDALE — At the final pre-game news conference before the final Orange Bowl practice, the final question came from deep in the back of the media room Sunday.

Virginia coach Bronco Mendenhall was asked what a win in the final game of the season would mean for his program.

“The University of Virginia has one 10-win season in 130 years of football,” he said.

There was no mic drop, but that was all he had to say. The media waited for more, but that was it. Mendenhall had summed up why this game is so important for Virginia football.

Because there’s never been much to Virginia football.

That’s why Florida fans have been grumbling ever since the bowl pairings were announced. They wanted to see a team with some football tradition, some football prestige.

Heck, at least an opponent whose fight song you know.

In a way, this is what we’ve been talking about for the last few years with attendance at football games, that it’s not enough that the Gators are playing a football game, it’s who they’re playing.

Ticket sales have been solid for this game because it’s the last game of the season and it is in Florida, but there isn’t a whole lot of national enthusiasm for UF vs. a team that barely (and questionably) made the rankings.

There are lesser bowls in this very state that will be played this week that are sexier.

But, and let me be clear about this, this is a very important game for both programs. If the TV viewers prefer to binge-watch Mrs. Maisel instead, so be it. If there are large chunks of empty seats at Hard Rock Stadium, it makes no difference.

These guys are all playing — all chose to play — in the Orange Bowl. It’s a big deal for them. And for two programs that had to dust off the stink of miserable seasons to get to this point, it matters that much more.

Yeah, this is a pretty sweet alternative.

“We understand the history Virginia has kind of had,” said Cavaliers linebacker Charles Snowden. “We were not a big name in college sports (other than basketball). A lot of us just kind of laughed it off. If I had heard the name Virginia a couple years ago I’d have probably had the same reaction.

“So we’re going to go out there and prove that it’s a new team and a new era.”

Florida, of course, has plenty of tradition and three national titles. But it hasn’t been a smooth decade for the fan base. Dan Mullen has a chance to record his 21st win in two seasons, which is something UF fans got used to in the Steve Spurrier and Urban Meyer eras.

And the last thing you want to do now is to step off the curb by losing your bowl game as a two-touchdown favorite.

“I think that (winning) helps catapult you into the next season on a positive note,” Mullen said. “We don’t get to play again until September. That’s a long time to sit around.

“I think it really kind of bolts you into the next season and the off-season conditioning program and just leaves everybody on a high note ready to get going.”

As a rule, winning sure beats the alternative, especially in bowl games because they are so final. That’s it, that’s a wrap, hope you enjoyed the season. Sorry that it had a worse ending than War of the Worlds.

There’s no question how important this game is for Virginia because of what Mendenhall said Sunday and the fact that this is only the second major bowl in school history.

“I hope they overlook us,” said defensive back Joey Blount. “We can really show the world of college football that UVA is an up and coming program, that it’s a force to be reckoned with.”

For Florida, with its rich bowl history and higher aspirations, the importance is more subtle and a lot of it is about getting next season started in the right way.

“It creates energy and excitement moving forward,” said defensive coordinator Todd Grantham. “What we had January, our first year here, there was a lot of uncertainty, guys kind of feeling their way, but after the Michigan win, we came in the next January, there was a lot of confidence because of what we had done in that bowl game propelling us into the offseason.

And for the seniors, you never want to go out with a loss. Even a one-year wonder like Jon Greenard.

“We’ll be the only game on at that time,” he said. “It doesn’t make it any easier. I’ve been in the ACC and when we were playing SEC teams we’re trying to knock them off because they’re the best conference in the game.

“Any time you have that talk in your head they’re going to send it at you. They’re going to give it their all. They feel like they have a chip on their shoulder coming into this game, which they should. We’re going to take this chip on our shoulder, too, in order to have that same mentality.”

So there you have it. It’s orange and blue vs. orange and blue, two stellar academic institutions playing a game where bodies collide and bad words are said.

It may not be big in Tupelo or Topeka. But it’s a pretty big deal to the two teams who will be playing tonight. 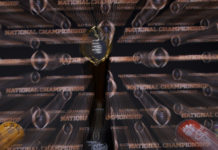 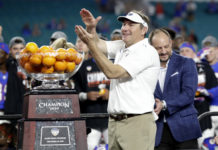