GatorSports.com
Facebook
Twitter
Pinterest
WhatsApp
As Dan Mullen walked across the “Abbey Road”-like walkway on Gale Lemerand Drive to another Signing Day news conference, his current team walked behind him toward the locker room, laughing and joking with another practice in the books.
It hit me, and Mullen agreed as we rode up in the elevator, that it’s all about cycles. One group of players cycles out, another cycles in.
This latest group, the players who signed on the New Signing Day (the old Signing Day is obsolete for everyone not immersed in recruiting), cannot be evaluated any more than any previous class could be.
But it’s a top-10 class, according to the websites.
At a top-10 school, according to U.S. News.
With a top-10 football team, according to The Associated Press, the SID’s poll and the College Football Playoff committee.
What’s not to like?
Oh, I know there were the pipe dreams of possibly getting some players to flip and I’m sure there was some disappointment among the Gator staffers.
Florida fans, of course, fall into two groups — those who have to be told how UF did in recruiting (“Top 10? Nice”) and those who believe the only perfect recruiting class is to sign the top-25 players in the country.
It’s a bit of a concern that no running backs were signed, but, as Mullen said, “It’s not the end of new Gators.”
The bottom line is that Florida’s Signing Day wasn’t sexy, but its class certainly is.
If you are down in the dumps because an Alabama commit didn’t flip, you’re missing the point that Florida signed a heckuva defensive line class.
If you are incredulous that Emmitt Smith’s son chose Stanford over his alma mater, put yourself in his place where the best he could do was get his name next to his father’s on the wall.
If you are looking at the players Florida didn’t get or the players the rest of the SEC did get, this must be your first year paying attention.
I remember many years ago when the coach was named Steve Spurrier and the Gators signed a top-10 class, but didn’t have any surprises on signing day (this was back in the old days when the first Wednesday in February was a national holiday). And I wrote a column about how Florida fans should try to imagine that the top three rated players in the class flipped at the last minute to Florida.
So let’s say on Wednesday, that Gervon Dexter, Derek Wingo and Ethan Pouncey were all question marks and they all pulled out Gator hats on national TV. Some Florida fans would be ecstatic. (The rest would be wondering who the heck is Derek Wingo.)
The point is that it’s all about timing when it comes to the impact of a recruiting class on the public’s mindset. We have no idea if any of these kids can play and this isn’t the annual snubbing of the nose at how much people care about recruiting.
Instead, it just feels like Florida got a lot deeper Wednesday. And we all know how important depth can be. Florida survived a depleted roster that was down to the mid-60s this season. But you can’t do that year after year.
“We’re getting there,” Mullen said. “We’re heading in the right direction.”
And later he said, “We’re not very far off.”
And, “We’ve started to build that consistency of winning.”
That’s the key. Mullen has always said he’s trying to build something special here and he’s trying to do it without a level playing field (facilities-wise).
Building takes time. Wednesday was another brick in the wall.
“We have what multiple people think have a bunch of good players coming in,” Mullen said of the recruiting rankings.
They are paper rankings, but this much we know — Mullen and his staff have shown year after year how they can develop players. It will be fascinating to see what they can do with all of these four-stars, some who should be five-stars.
And we haven’t even delved into the NCAA transfer portal.
— Contact Pat Dooley at 352-374-5053 or at pat.dooley@gvillesun.com. And follow at Twitter.com/Pat_Dooley. 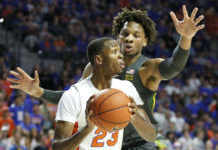