Following an MVP performance at the Charleston Classic, Florida sophomore Keyontae Johnson earned his first-career SEC honor as he was named SEC Player of the Week on Monday.

Johnson averaged 16.3 points and 8.0 rebounds at the Charleston Classic, helping the Gators claim their first holiday tournament title in a decade.

On Thursday, Johnson notched a career-high 22 points to go along with 12 rebounds against St. Joseph’s. Johnson’s emphatic double-double performance marked his first of the season and fifth of his career.

During the championship game in Charleston, Johnson solidified his MVP campaign as he put up 15 points and grabbed five rebounds in the Gators’ 70-65 win over No. 18 Xavier. 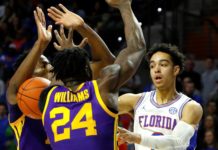 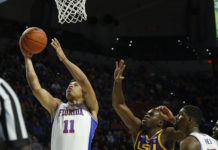