After opening the season with three games in the Exactech Arena, the Florida men’s basketball team will take on UConn at 3 p.m. today in the team’s first road contest.

No. 15-ranked UF picked up a six-point win Thursday night against Towson University in a contest that was much closer than many expected. An 18-point favorite before tip-off, the Gators trailed late before securing the game at the free throw line.

It marked the first time this season that the Gators hadn’t been outscored in the second half — an issue that’s given fifth-year UF coach Mike White some concern in the early going.

There were plenty of positives aside from the win, however. The Gators received a career-high 15 points from highly touted freshman Scottie Lewis in a game that also marked his first collegiate start. And after being unable to get Kerry Blackshear Jr. involved late in Florida’s 63-51 loss to FSU, the graduate transfer attempted a game-high 14 shots against Towson — an area of emphasis heading into the game, said White.

“We don’t want to be one-dimensional. We’ve been one-dimensional for awhile,” White said. “And as we go through this process, we understand we’re going to take some lumps and there’s going to be some lessons and some trial-and-error.”

It resulted in Blackshear’s third double-double in as many games this season, although he connected on just four shots — an uncharacteristic performance from the field for UF’s new post presence.

After 120 minutes of meaningful action with Blackshear, White said the plan to pass the ball in the frontcourt will continue, against the Huskies and beyond.

“The perimeter passing to the interior, if it was an ‘F’ the other day, it was at least a ‘B+’ tonight,” White said Thursday. “We continued to throw that thing in high-low opportunities, spring pick-and-roll opportunities, just wing-post passes. Just simple plays.”

With Gorjok Gak and Dontay Bassett each still sidelined, the Gators have relied on freshmen Jason Jitoboh and Omar Payne to back up Blackshear in the post. The duo combined for 10 points on 5-for-5 shooting in 16 minutes while looking more comfortable in the flow of the game on the defensive end.

“The amount of times that Omar and KJ and Jitoboh caught that thing, it put a little pressure on their defense,” White said. “It was nice to see, and we’ve been stressing it all fall. I don’t know that we’re going to be a pound-that-thing-inside-every-possession type team, but we’re trying to get good at it, and we’re trying to get good at driving it, shooting it, drawing fouls, the whole thing.”

But that was at home — with five freshmen playing roles for UF this season, it remains to be seen how the new Gators react in a hostile road environment.

“We’ll talk about playing on the road for the first time, especially with these young guys. I mentioned it earlier, not letting our emotions get the best of us, understanding that it’s going to be very, very difficult,” White said. “The travel, meals, film, the hotel — this is going to be the first go-around for all of these guys. So what we’re going to have to do more than anything, is really lock in on the game plan.”

Notes: The Gators and Huskies open up a home-and-home series with Sunday’s showdown in Storrs, Connecticut. The Huskies will travel down to Gainesville in the 2020-21 season … It marks the second home-and-home between the teams over the past decade, the last of which UConn swept, with an additional Huskies victory in the Final Four sandwiched between the on-campus meetings … UF’s last trip to Storrs ended with a heartbreaking loss, as Shabazz Napier tracked down an offensive rebound off of his own miss and sunk a buzzer-beater to win the game, 65-64. The Gators followed that loss with 30 straight wins, entering the NCAA Tournament with the #1 ranking before falling to the Huskies again in the Final Four. 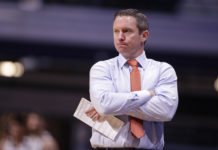 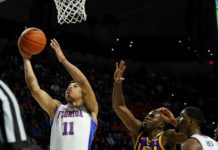 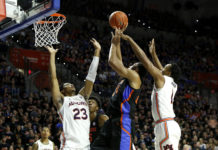