The Florida men’s basketball team is ranked No. 6 in The Associated Press preseason poll released Monday.

It matches the Gators’ second-highest preseason ranking in program history, behind only UF’s 2006-07 campaign debuting at No. 1. Florida also opened at No. 6 in the 2001-02 season. It marks Florida’s 13th time opening the season in the AP’s top 10, including the second under coach Mike White. Previously under White’s watch, the Gators opened at No. 8 in the 2017-18 season and climbed as high as No. 5 later that season.

Florida’s roster boasts a host of young talent, as all three returning starters from last season’s squad are sophomores, pairing with a six-man freshman class highlighted by McDonald’s All-Americans Scottie Lewis and Tre Mann. The veteran presence comes from graduate transfer Kerry Blackshear, the team’s lone senior, along with junior Dontay Bassett in the post.

Florida hosts an exhibition game vs. Lynn University on Oct. 29 before tipping the regular season on Nov. 5 vs. North Florida.

The top 25 teams in The Associated Press’ preseason 2019-20 men’s college basketball poll, with first-place votes in parentheses, final 2018-19 records, total points based on 25 points for a first-place vote through one point for a 25th-place vote and last year’s final ranking: 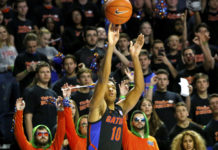 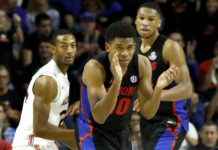