On the day Mike White started practice for his fifth season as Florida’s basketball coach, the University Athletic Association released a new contract that includes a raise and an extension.

White’s new two-year extension, which was signed in May, makes the length of the contract run through April of 2025.

White was hired as the UF coach May 7, 2015, to replace Billy Donovan, the most successful coach in Florida history. Donovan left for the Oklahoma City Thunder of the NBA.

The 42-year-old White has a record of 89-53 in his first four seasons as the Gators coach, 43-29 in SEC play. He has taken UF to three consecutive NCAA tournaments, reaching the Elite Eight in 2017 and recorded five wins in the tournament.

The Gators are expected to be ranked in the top 10 in the preseason polls with a roster that includes the No. 8-ranked recruiting class this year and the top grad transfer in Kerry Blackshear Jr. 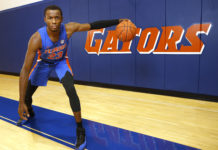