A year after ending Florida’s 31-game winning streak in the series with a stunning victory in The Swamp, the Kentucky Wildcats could not make it two in a row after failing to protect an 11-point fourth-quarter lead against the Gators and backup quarterback Kyle Trask on Saturday night.

In what will go down as one of the greatest SEC road comebacks in school history, the Gators overcame the Wildcats to pull out a 29-21 victory, with Trask, who replaced injured starter Feleipe Franks in the fourth quarter, leading Florida on two clutch touchdown drives to put UF up for good.

“We found a way to win, and we didn’t do that last year,” UF coach Dan Mullen said. “We made some mistakes, but we believed we were going to win the game.”

The UF rally left what had been a raucous crowd of 63,076 stunned and silent at Kroger Field.

Trask completed nine of 13 passes for 126 yards and ran for a touchdown, as the Gators piled up 19 points and 222 total yards in the fourth quarter after having only 10 points and 216 yards through the first three quarters.

“That’s what we expect from him,” Mullen said of Trask’s performance.

Said Trask: “We were expecting to finish like that. I’m really proud of the guys for the way they played.”

No. 9 UF (3-0 overall and 1-0 in the SEC) sealed the victory with a 76-yard touchdown run by wide receiver Josh Hammond on a jet sweep with only 33 seconds left in the game.

Franks sustained a season-ending dislocated ankle late in the third quarter and had to be carted off the field.

“I told him we love him and we will all be there for him,” Mullen said.

Florida now has a new starting quarterback. And it looks like he has a chance to be a very good one.

At least that’s the first impression Trask left everyone with.

Trask came off the bench and was an instant success executing the Gators’ passing game and moving the offense up and down the field.

He entered the game with UK leading 21-10 and quickly changed the tone.

In his first series, Trask completed his first four pass attempts for 54 yards, setting up an 8-yard TD run by Lamical Perine to cut the deficit to 21-16 with 12:41 remaining.

In his third series, his 30-yard completion to tight end Kyle Pitts led to his four-yard TD run one play later to give the Gators a 22-21 lead with 4:11 remaining.

The Wildcats (2-1, 0-1) had a chance to retake the lead with less than a minute remaining, but Chance Poore’s chip-shot field goal attempt from 35 yards sailed wide right with 54 seconds to play.

Kentucky, still holding on to all three timeouts, was still in position to possibly pull out a late victory. But on a third-and-six play from the UF 24, Hammond took a handoff from Trask and raced around right end for 76 yards and a touchdown to leave little doubt about the final outcome.

“We were in a zero blitz trying to stop them, but it got on the perimeter and he just ran away,” UK coach Mark Stoops said. “There’s a lot of good things we did against the No. 9 team in the country. But it hurts.”

For much of Saturday night, the Gators appeared determined to help the Wildcats win their second in a row in the series for the first time since 1976-77.

For the first three quarters, the Wildcats were clearly the better team, dominating both lines of scrimmage.

Just like a year ago, the Gators did not help themselves in those first three quarters, turning the ball over twice, having two touchdown runs by Franks called back by holding penalties and losing starting safety Donovan Stiner to a targeting foul in the second half.

But then just when it appeared things were going to get even worse with the Franks injury, the Gators came to life behind Trask and pulled out an improbable victory. 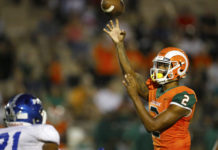 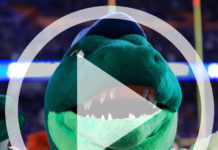