JACKSONVILLE — Taven Bryan is nothing if not brutally honest with himself.

“I made a lot of mistakes … I’m just learning from them,” said the Jaguars first-round 2018 draft pick on Monday after practice, referring to his growing pains as a rookie last season. “I was playing a little too passive.”

There was nothing passive about the way the former University of Florida defensive tackle played last week in the Jags’ 20-7 victory over Tennessee at TIAA Bank Field. And the Wyoming native now heads back to the Rocky Mountains on Sunday when the Jags play at Denver (4:25 p.m., CBS).

Bryan had three tackles, one sack and two hurries against the Titans, contributing to a pass rush that recorded nine sacks and 13 hurries against quarterback Marcus Mariota.

And Bryan finally looked the part in doing it, on two plays in particular.

He bull-rushed Titans left tackle Dennis Kelly and collapsed the pocket, forcing Mariota to run, then quickly shed a block by left guard Rodger Saffold III and took on running back Derrick Henry, stopping his progress until Yannick Ngakoue came from behind to help finish.

The latter play is what Jaguars coach Doug Marrone has been waiting to see — Bryan getting rid of a blocker, finding the ball and finishing plays.

“His strength has always been on tape,” Marrone said. “His ability, one on one to just be able to penetrate and knock someone back. What hasn’t been there for him as much as he would like and we would like is the ability to get off that [block] and make a play. Now he’s starting to do that. That can be something that will really help our football team.”

Bryan has already matched last year’s total of one sack and has five hurries in three games.

He didn’t show much promise in training camp that he had improved but gradually began making a few plays in the preseason games. Bryan had one hurry in the opening game against Kansas City, had two tackles and two hurries against Houston and then turned in his best game as a professional against the Titans.

Marrone seemed most pleased that Bryan has put together two good games in succession.

“He’s done some good things, and he’s now starting to put them back-to-back,” Marrone said. “It’s something we’ve been building on, and he’s been working extremely hard.”

Marrone also said not every first-round draft pick is an instant success and has been counseling patience with Bryan since last year.

“You’re not going to immediately get that type of performance you want right away,” he said. “You’d like that. We all would. I’ve seen them have great years is year one and disappear on year two and everyone’s wondering what the hell is going on. I look at it where we are today, where we were with a player the week before and where are we going with him. And right now, we’re going in the right direction [with Bryan] and I’m excited about that.”

Bryan said there’s a rhythm to playing the interior of the defensive line and the brutal struggle against blockers. There’s brute strength but also feel, fundamentals and instinct.

He thinks he’s starting to find the balance.

“I’m doing better getting off the ball … eye placement, not looking in the backfield enough, keeping the hands low,” he said. “Getting off blocks, I’m not so much focused on what the guy is doing. It’s a timing thing. Get off [at the snap], hit the guy, one-two, get off the block and try to make a play.”

And then there’s good, old-fashioned learning by repetition.

“You always get better the more you do something,” he said. “Mess up things, learn how to do it the right way.”

Garry Smits is a sports writer for the Florida Times-Union in Jacksonville. 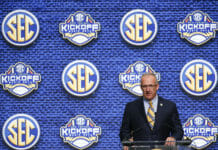