“I don’t know how long it’s been, but it’s been a very long time,” Davis said.

He was quickly informed: 707 days.

Before his one-yard plunge in the third quarter of Florida’s 45-0 win over UT-Martin, a game in which the Gators collectively rushed for 231 yards and three touchdowns, that’s how long Davis had waited for another touchdown.

Memories of that game on Sept. 30, 2017, in which Davis rushed 17 times for 124 yards and two touchdowns in Florida’s 38-24 win over Vanderbilt, had served as frequent reminder of why expectations for Davis remain lofty.

Following the first season-ending injury, Davis made a surprisingly swift recovery, only to suffer a similar fate just three games into the 2018 season. Fully healthy once again, and with more than a year of Nick Savage’s strength and conditioning program under his belt, Davis appears to be in his best shape yet.

But it’s one thing to be in game shape, and another to help shape the game.

“It’s pretty challenging. You come back and you practice all camp, you’re doing well, but it’s just a different feeling to get those reps in a game,” he said. “I feel pretty good, you know. I feel like I finally got my feet back wet, feeling comfortable. So it was a great feeling. It was exciting to have my first win back in The Swamp.”

No one is fully healthy throughout the course of a college football season — it’s about staying healthy enough to remain on the field.

It’s a sentiment that might resonate with multiple Gators, including redshirt freshman Jacob Copeland.

The most highly recruited, and arguably the most dynamic, member of Florida’s 2018 recruiting class — Mullen’s first on campus — Copeland missed most of the 2018 season while nursing an injured quad muscle. He hauled in just a lone 16-yard reception before redshirting, leaving Copeland and fans alike hoping for more in 2019.

As it did for Davis, Saturday served as a reminder of Copeland’s ability to affect the game in a positive way.

The Pensacola native hauled in his first collegiate touchdown on a five-yard reception in the second half, one of three catches on the night for the former four-star recruit. In the moment, words likely wouldn’t have done Copeland’s feelings justice.

But if anyone knew just how he felt, it was Davis.

“I definitely can relate, because I know how badly he wants it and I know he works hard. I know he was anxious to get out there and make some plays,” Davis said. “I was out for awhile and I’m just happy to be back out there.” 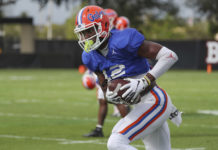