Florida quarterback Kyle Trask will make his first collegiate start Saturday against Tennessee, something he’s earned with his performance in rallying the Gators to a victory at Kentucky last Saturday night.

But it won’t necessarily be his game. Or, rather, his complete game. Because Trask will be sharing playing time with redshirt freshman Emory Jones. That was the word from UF coach Dan Mullen on Monday. He plans to play two quarterbacks against the Vols.

“I expect us to play both guys, in combination, for several different reasons,” Mullen said. “They both bring something different to the table. How they run certain plays, you get a little different weapon.

When starting quarterback Feleipe Franks went down late in the third quarter against Kentucky with a dislocated ankle that has ended his season, Trask got the call and the redshirt junior responded in a big, positive way.

He entered the game in the fourth quarter with the Gators trailing 21-10, and quickly got the offense moving, leading UF to a touchdown in his first series, starting the drive with four consecutive completions totaling 54 yards.

Later in the quarter, he led the Gators on another touchdown drive that gave UF the lead for good with 4:11 to play.

In his one quarter of work, Trask completed nine of 13 passes for 126 yards and the Gators outscored the Wildcats 19-0 to pull out a 29-21 victory.

Heading into the second half, Mullen had planned to play Jones at some point. But the way the third quarter was playing out, with the Wildcats building a 21-10 lead, there was no ideal time to insert Jones. Then Franks got hurt in the closing minutes of the quarter and Mullen had a decision to make: Jones or Trask.

He went with the more experienced Trask, with the plan to also use Jones at some point.

“I just think, in the situation we were in, we were going to let (Trask) take the first snap,” Mullen said. “We were planning on playing both guys at that point. Actually, I had a couple of plays that we were going to call for Emory coming out in the second half, didn’t get them called and then Feleipe goes down.

“So you’re going to put Trask in at first just to get everybody settled down, he has a little more experience. And he came in and he was hot, and how we were moving the ball, it was going to fit with what he was doing. We just never got to the other plays at that point. We were kind of moving it and we just stuck with what we were calling.”

Now, as the Gators move forward without Franks, both former backups are going to be in the game plan, starting with Saturday’s game.

Trask and Jones both have some game playing experience and have gotten extensive reps in practice during their time at UF. Trask is probably known as the better passer, while Jones is a legitimate dual-threat quarterback capable of making some dynamic things happen with his legs, scrambling out of the pocket and on designed QB runs.

Both are ready for the moment, Mullen said.

“I sat down with Kyle and Emory this morning and I said, ‘Here is the great thing, you guys have gotten enough reps to be prepared for this,’ ” Mullen said. “It’s not like, ‘OK, we really need to load up now because you’re the guy. You’ve gotten a lot of reps. I know you guys are prepared for this moment.’

“We’re not going to change the offense around completely around them. Our job is putting them in position and do what they do well and let them be successful out there on the field. I think they know the team and the coaches have confidence (in them).

Mullen and the offensive coaches will spend the week working on a plan on how to best use the two quarterbacks so that the offense can run with maximum efficiency.

“It will work out well,” he said. “Both guys will be prepared. Emory obviously brings a different aspect to the game with his running ability and that will be something big for our offense just to have that dynamic and causing the defense to have to adapt to different things within a game.

“It will be a lot harder for a team to game plan against the two of them than just to prepare for one of them. We will be able to play both of those guys this weekend and they’ll both be prepared and ready to make plays for us on offense.”

Trask hasn’t started a game since his freshman year of high school. Now that he’s finally getting his opportunity to start, he’s going to end up sharing some playing time. But he seems OK with that.

“We’re here to do what’s best for the team,” Trask said. “Whatever we need to do, we’ll do whatever the coaches ask. When our number is called, I’m sure we’ll produce.” 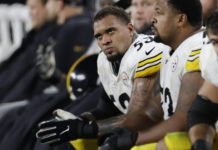 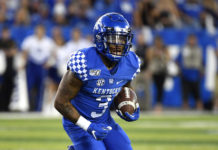 Frenette: A season without football tough to imagine, but harder to ignore