10. We’re all excited that there is a game this week (two, actually, but we’ll focus on Florida-Miami and leave Arizona-Hawaii for a handful of media boys and girls). Is there anybody more excited than Marco Wilson? The junior cornerback missed almost all of last year with a knee injury and you could see it in his eyes even at the Peach Bowl that he wanted to play so badly he was thinking about sneaking on the field. Instead, he finished the rehab and is ready to return against Miami. A guy from Fort Lauderdale can’t help but be fired up. “It’s going to be a sigh of relief,” Wilson said Monday about running onto the field Saturday. “Running out of that tunnel knowing I have a job to do is really exciting.” That job will be to make life difficult for first-time starter Jarren Williams of Miami. I would expect a lot of short passes from the Hurricanes offense to let Williams get his feet wet, but you know Miami is going to test Florida’s secondary deep with the speed it has at receiver. And new Miami offensive coordinator Dan Enos has a penchant for the play action.

11. Certainly, a lot will be made about the fact Manny Diaz and Dan Mullen used to coach together. Mullen talked about it Monday and it was pretty clear the guys saw eye-to-eye during their two stints together (in 2010 and 2015). I think it’s a wash that both coaches know each other and what each one likes to do. “Even when he came back to Mississippi State, he was coaching a little different than before,” Mullen said. “He had grown. So had I. It’s not like he’s coming in with the exact same defense that he had (at Mississippi State). But he still has his personality out there.”

12. Maybe you have this mentality and maybe you do not. But there is this weird summer sensation that you can’t wait for the season to get here and then the first day of Game Week is here and you’re, like, “Hold on here. Let’s slow things down a bit.” Kind of like getting an MRI for the claustrophobic. I’m sure the coaches get that way as well. They can’t wait to see what this team is going to look like, but aren’t sure if they want to see it with all of the early warts. One thing is sure — we are all going to overreact to whatever happens in Saturday’s game and again when everybody else starts next week. I always think back to five years ago when Kenny “Trill” Hill threw for 511 yards in Texas A&M’s opener and was declared the Heisman Trophy favorite. He was benched in the middle of the season. And a week after Hill lit up South Carolina, Ohio State lost at home, ending the Buckeyes shot at making the playoffs. They ended up winning the national title that year. I’m just saying, don’t overreact, especially in August. Leave that to the professionals.

13. It was another aggressive move by Florida athletic director Scott Stricklin to agree to a home-and-home with Miami and a necessary one even if you aren’t a fan of playing that team. This is a different world for ADs around the country because they are faced with attendance drops. Whether they are bolstering schedules at Alabama and Georgia and Florida because of the real possibility of an eight-team playoff down the road or simply to give fans a reason besides cheering for the home team, it’s happening and that’s good for college football. But it still seems like an easy solution would be for the SEC to go to nine games. It is borderline silly that Florida is visiting Ole Miss next season for the first time since Tim Tebow was a sophomore, but the league keeps sticking to the premise that things are working out pretty nicely with the eight games. The SEC has played in 11 College Football Playoff games (more than that Big Ten, Pac-12 and Big 12 combined) and dominated the final decade of the old BCS. But in the end, the league’s stubbornness is contributing to the decline in fannies in the seats at its own stadiums.

14. To say there were no surprises in the Associated Press poll that came out Monday is an understatement of epic proportions. The top 10 was exactly the same as the coaches poll and there was only one team ranked that wasn’t ranked by the coaches (Nebraska instead of Northwestern). Miami is 29th in both polls. Nice imagination. At least I wasn’t the only person to rank Alabama first (there were nine others among the 62 voters). But the greatest stat I saw about the AP poll is that of the top eight teams, seven of them have quarterbacks who have started games in the SEC. That’s crazy.

15. Hey, there is one simple rule you have to follow in baseball and everything else is just window dressing. You run everything out. Foul pop-ups, sharp grounders, balls you think you’ve hit to the moon. Ronald Acuna is a stud and it has been a blast watching him, but he didn’t run out a ball he thought was going out and he was pulled an inning later. There was actual debate about whether it was a good idea for manager Brian Snitker to take him out, but it’s a no-brainer. Hopefully, lesson learned and Acuna doesn’t go all Antonio Brown and get angry about his helmet.

16. As baseball has become all about home runs and strikeouts, golf has become all about hitting your driver as far as you can and hope you get a hot week with the putter. “The driver is the most important club in the bag because of the way the game is played,” said Tiger Woods. On the Tour this year, 49 players averaged over 300 yards a drive. I gotta say, the restricted golf ball is sounding like a better idea. What those guys did at Medinah last week (20-under par got you third place) was ridiculous. The season ends at East Lake, but this new scoring system with Justin Thomas starting out at 10-under seems to point to “unwatchable” on the Dooley Meter.

17. The Tweet of the Week comes from Molly McGrath of ESPN — “Things my husband will do for Golf, but not for me: 1. Wake up early 2. Improve his flexibility 3. Watch instructional videos to improve 4. Buy clothes 5. Spend 5 hours outside. I am stuck in a love triangle.” Check, check, check, check, check.

18. Because it is Game Week (always a proper noun), I will sprinkle a little hype into this week’s playlist. Remember, I am very old. So my idea of hype may be different than yours.

• I spoke in Destin last week and there was strong pressure on me to include a song from someone who got his musical chops in Gainesville. But that’s not the way this works. I bring songs to you. Your mind is expanded. Like this one — “Gainesville” by Drew Kennedy and co-written by the great Wright Thompson.

• “Everybody Wants To Rule the World” by Tears For Fears.

• OK, I give in. For a not that old one, here’s a song from someone from Gainesville. “You Wreck Me” by a little band called Tom Petty and the Heartbreakers. 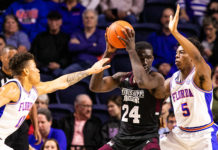