LOUISVILLE, Ky. – The No. 10 Florida volleyball team topped No. 25 Louisville 3-0 in front of a sellout crowd on Friday evening.

With the victory, Florida (1-0) has now won 27 season openers, including five against ranked opponents.

“This is going to be one of those wins that means even more down the road as a young Louisville team gains its experience,” said UF coach Mary Wise. “They will be a tough out in the ACC. We had lots of good performances to build on from the first match.”

Thayer Hall led the way on the offensive front for the Gators, notching 12 kills against the Cardinals (0-1). Rachael Kramer pitched in seven, whole Holly Carlton and Paige Hammons secured six kills apiece in the victory.

The Gators recorded 14 blocks at the net, a great performance for the first match. Kramer and Carlton led the way with five blocks apiece.

Marlie Monserez dished out 28 assists on the day, running the offensive system for Florida. In her return home, Allie Gregory recorded a team-best 14 digs, while Hall pitched in 12.

The Gators continue the Cardinal Classic on Saturday with a matchup against Dayton at 4:30 p.m. 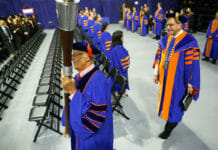 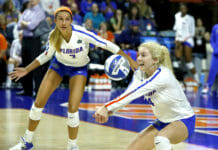