How much more comfortable does Joe Moorhead seem in Year 2, and how much is that rubbing off on the team?

“His confidence is through the roof. I mean, he came in with it, and it’s rubbed off on us as leaders, his confidence. It’s a huge trait of his. Our expectations are through the roof, but the outsiders aren’t going to believe in us, so we just have to show everybody what we can do.”

How important is the tight end position in the SEC?

“We’re all athletic, big, versatile and can do whatever Coach Moorhead wants us to do. And the mismatches — not too many guys can guard us in this conference, I truly believe that.”

From your experience, what type of jump can players take under Coach Dan Mullen from Year 1 to Year 2?

“A huge jump. That’s one thing about Coach Mullen, he develops guys to an extreme. I came in skinny, lanky guy, underrated. After my redshirt year, I was able to perform at the highest level. I’m thankful for Coach Mullen.”

What does Mullen do to make that improvement possible?

“Tough love. Tell you what you need to hear, not what you want to hear. Those guys keep it honest and real with you from Day 1 and they push you to the extreme. They get the best out of you and it’s for your best benefit.”

Many people expect seniors to automatically become leaders, but it doesn’t exactly work like that. What has the process been like for you?

“It’s something that I kind of grew into. I didn’t know how to take it at first, but it’s something that will help my team be better, and I’m ready to do that. You can’t just force anyone to be a leader — it has to be in you, and I want to see guys around me be their best, including myself, so I try and hold everyone accountable.” 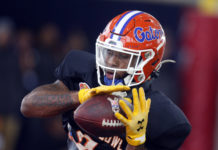 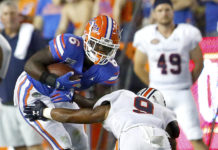