SEC Media Days has become a TV event just like about everything else in our business. The SEC Network would probably like to follow around a half-dozen sportswriters for the week — call it “The Real Hacks of Hoover” — but would anyone really like to watch people writing stories and then telling old stories over beers?

Of course, not. Anyway, the real value of SEC Media Days is talking to people, not just the players and coaches but the people who cover them. Some of what you learn gets put into a baggie and tucked into the back of the fridge for later use, but you know it’s there.

This was my 25th consecutive SEC Media Days, so why not give you the 25 things I learned in Hoover, Ala.?

1. The Ruby Tuesdays in the Galleria Mall is no more. We would go there at least once during the week. There is now a Dave & Buster’s. It looks like a perfect spot for a Saturday watching football with all the TVs. Not that I will ever find out.

2. There were 14 head coaches, and they were all holdovers. So they knew the drill and worked hard not to say anything interesting. The bigger story was all of the new coordinators in the league. There are 11 new ones out of the 28, three of them former head coaches. Jim Chaney’s move from Georgia to Tennessee is the most intriguing. The dudes are getting paid — eight make at least $1.5 million.

3. Jeremy Pruitt is the new filibuster king. He talked about his football team (without really saying anything) for 22 minutes before taking questions. It used to be Les Miles, who would give you the details of his vacations. Before him, it was Jackie Sherrill, who could do two minutes on his offensive line back-ups.

4. The media isn’t real high on Tennessee. There was a lot of negative stuff written about the Vols, including Matt Hayes from Bleacher Report declaring Tennessee can never be great again. It all goes back to blowing the 2001 SEC title game with a chance to play for a second national title in four years. Since then the Vols are 16 games under .500 in SEC play with no titles, a bunch of second-tier bowl games and three straight losses to Vanderbilt.

6. There was a lot of talk about the possibility of Florida-Georgia moving to the campuses. Most of it was by people who don’t understand the dynamics of it, whether it’s the south Georgia boosters who wield power to keep it in Jacksonville or the purely financial reasons it makes sense to stay. I’m sure in four years when they have SEC Media Days on the moon, they’ll be talking about moving it again. I wrote a big story about the chances it might move … in 1983. It’s not going anywhere.

7. Nick Saban was grumpy and we figured he would be after the rare shellacking he took against Clemson in January. Still, it was surprising to see him throw his assistants under the bus saying their agendas changed after the Tide beat LSU and that’s why Alabama lost its edge. Want some cheese with those sour grapes, little Nicky? That became the biggest story of the week. In fact, I think Clemson was mentioned more times at SEC Media Days than at ACC Media Days.

9. There was no more confident team and coach than LSU. Quarterback Joe Burrow talked about how different the offense is going to be. But it feels like I’ve seen this movie before.

10. I know Media Days are going to Atlanta and Nashville the next two seasons, but this thing belongs in Hoover. It is the best set-up (Atlanta was not good last year; the radio guys called it the Vortex because it was so difficult to get guests to go from one building to another). Hoover feels like home “This is our baby. It isn’t the same anywhere else,” Tweeted Barrett Salee of CBS Sports.

11. I don’t know if Lamical Perine is going to lead the SEC in rushing, but he was the best interview of the week. No matter what you asked him, he had a great answer. Don’t go changing, Lamical.

12. There were a lot of questions about the transfer portal and Dan Mullen told us, “It’s going to be a rough two years,” as we try to figure it out. Saban went a step further saying the problem is that the NCAA is too liberal with waivers and there are so many transfers because every player thinks they will get a waiver. He’s right, but then he said every kid needs to sit a year and that’s wrong.

13. Several coaches thanked the media for what we do. I’m not sure if they were sincere, but you’re welcome.

14. I thought coach Mark Stoops might come across as angry because of a lack of respect, but the only time he looked irritated was when someone pointed out Kentucky hadn’t beaten Florida in back-to-back years since the 1970s. Of course, he’s probably really ticked off now that we have voted Kentucky sixth in the East.

15. I hope all of the players looked around and noticed all of the former players who have great-paying gigs in the media now. All of those guys — Chris Doering, Marcus Spears, Greg McElroy, etc. — were cordial with the media when they played. It’s not that hard guys.

16. Mississippi State seems to have a lot of confidence for a team that lost so much. The Bulldogs have a chance, but they have to stay healthy at some key spots.

17. All seven Florida players I voted for made one of the three All-SEC teams. So I have that going for me.

18. I thought Steve Shaw, the SEC’s head of officiating, gave a nice presentation on the changes in targeting. I think you will see more overturned this year. Also, a player who gets three now has to sit out the next full game as well as the one he is playing. Shaw said there were three times that happened last year.

19. I did not realize Arkansas has only two home games in Fayetteville this year. Or that Chad Morris is the new king of coaching cliches. He’s Butch Jones with an accent.

20. Steve Spurrier was easily the most interesting person of the week.

21. There were a lot of players who looked like Sunday guys (NFL), but the quarterbacks were actually a little smaller than I thought they would be, especially Matt Corral at Ole Miss. Of course, the Heisman Trophy winner last year wasn’t real big.

22. Coach Gus Malzahn may be on the hot seat, but he’s betting on himself by calling the plays. Auburn has the most interesting quarterback situation with two dual-threat guys — Joey Gatewood and Bo Nix. Sometimes, a competition like that can divide a team. Should be interesting.

23. I put Vandy’s Ke’Shawn Vaughn as my first running back on my ballot. Teammate Kalija Lipscomb said Vaughn “is the best running back in the SEC, point blank period.” Florida fans should be grateful he left the game with an injury last season with Vandy up 21-3. He’s really special.

24. One complaint — how can you have a huge hotel without a vending machine on each floor? I went without Diet Coke for the whole trip. The SEC does supply us with Diet Dr. Pepper, and that’s all I have to say about that.

25. It was great to see so many friends, and I feel enlightened about so many programs. And our takeover of the hotel bar was epic. Goodbye, Hoover. 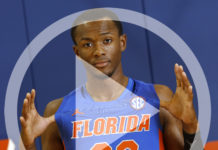 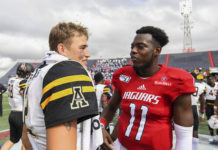