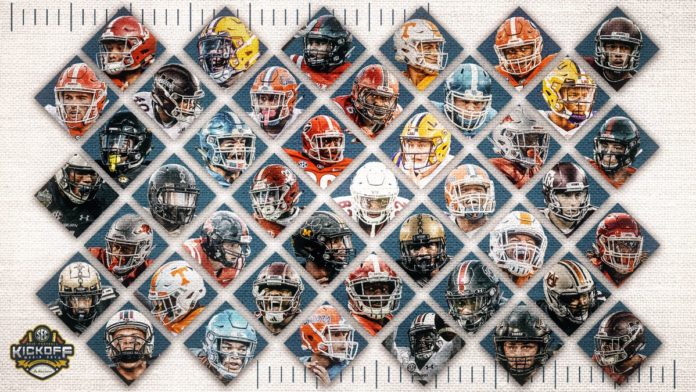 SEC Media Days moves back to Hoover, Ala., starting Monday and that means The Gainesville Sun’s two veteran sports writers will be there with laptops and tape recorders.

In preparation for Monday’s opening salvos at the annual clambake, Pat Dooley and Robbie Andreu will make their predictions for how each division will finish up with the caveat that they can change their minds as we get closer to the season.

Here’s how Dooley and Andreu will vote this week:

1. Georgia: It’s the predictable prediction. The Bulldogs still have the best roster in the East even though they appear more vulnerable than last year, especially with the attrition at wide receiver.

2. Florida: Speaking of attrition, I give you the Gators. There is still a lot of talent at the skill positions, but this team will only go as far as its offensive line.

3. Missouri: I’m on the Tigers’ bandwagon for several reasons, one of them being how they were unaffected by the transfer portal even with a bowl ban (it’s being appealed). If Kelly Bryant transitions smoothly at quarterback, watch out.

4. South Carolina: Like the team, hate the schedule. It will be really interesting to see how QB Jake Bentley plays after an uneven junior season.

5. Kentucky: There won’t be a huge fall, but I think the Wildcats take a small step back this year.

6. Tennessee: The Vols are slowly building something, but there is still a long way to go. On the other hand, they have eight home games and a soft non-conference schedule.

7. Vanderbilt: This could be the end for coach Derek Mason, who has done a good job in a tough situation.

1. Alabama: You would think all of the turnover on the coaching staff would catch up to the Tide, but maybe that’s why they went so soft with their schedule this year.

2. LSU: The word out of Baton Rouge is that the new offense is going to mean a different look for the Tigers. It seems like we’ve heard this story before.

3. Texas A&M: The schedule is brutal, but the talent is there to make a run at the West in coach Jimbo Fisher’s second season.

4. Auburn: Just can’t trust these Tigers. They seem to have the roster to compete, but who knows what a loss to Oregon early could do to the fragile psyches on the Plains?

5. Mississippi: The Matt Corral Era begins in earnest. The quarterback may be erratic at times this season, but he gives the Rebs a chance.

6. Mississippi State: This might be the best sixth-place team in a division in college football. So the Bulldogs have that going for them.

7. Arkansas: There are teams in this conference that could easily go 10-2 with the Razorbacks’ schedule. Arkansas isn’t one of them.

Georgia: Kirby Smart has turned the Bulldogs into the Alabama of the East. This may be the year Smart takes down his old boss in the SEC Championship Game.

Florida: Given all the departures and some setbacks in recruiting, there’s been a negative vibe around the program, so this is a shaky pick.

Kentucky: The Wildcats have lost their most dynamic players on both sides of the ball, but coach Mark Stoops has built this program the right way.

Tennessee: I have a feeling the Vols are going to be a whole lot better than most are anticipating.

South Carolina: This is a talented team, led by a very talented QB, but the schedule is an absolute bear.

Missouri: Mizzou seems to always get the most out of its talent, so this should be another dangerous Tiger team.

Vanderbilt: Landing in this spot — again — doesn’t mean this is a bad team. The Commodores have some dynamic offensive weapons and should be fun to watch.

Alabama: That beatdown at the hands of Clemson has surely knocked some of the swagger out of the Tide, right? Nah.

LSU: The Tigers, again, are one of the league’s most talented teams. But they’re not quite good enough to get over the Bama hump.

Texas A&M: Jimbo Fisher is a heck of a coach, and he has enough talent and an experienced QB to make Alabama and LSU nervous.

Auburn: With a new starting QB, there are concerns about offense. But no worries on defense, where the Tigers are loaded, especially up front.

Mississippi State: The Bulldogs should be more proficient on offense in coach Joe Moorhead’s second season. Defensively, MSU might take a step back after losing all that elite talent.

Mississippi: Surely, the Rebels have to be better on defense. But then they’ve been saying that in Oxford for the past two seasons.

Arkansas: The Hogs should be better in year two under offensive-minded coach Chad Morris. But probably not significantly better.

UF coach Dan Mullen, quarterback Feleipe Franks, defensive lineman Jabari Zuniga and running back Lamical Perine will represent the Gators in front of more than 1,200 credential media members in attendance at Hoover, Ala., and a national TV audience.

Florida will make its rotation through the SEC Media Day floor by participating in multiple interviews with various media outlets from 3:30 to 6 p.m. ET. Mullen will take the podium in the main media room at 3:30 p.m. today and it will be aired live on the SEC Network. 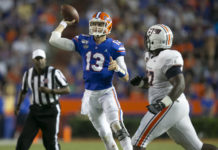