COLUMBIA, Mo. — Better late than never. That’s the approach the Florida baseball team seems to be taking in order to earn a bid to the NCAA tournament.

Florida completed a weekend sweep of No. 24 Missouri with a 4-3 win Saturday. The Gators (33-23 overall) have now swept the Tigers four years in a row, winning 12 straight games to finish league play with a 13-17 conference record heading into the SEC Tournament next week in Hoover, Ala., where the Gators will most likely need to win several games to improve their NCAA resume.

“I haven’t really looked at it that closely,” UF coach Kevin O’Sullivan said of the Gators’ postseason bid. “I’ve been trying to help these young players get better. Every coach is going to feel like their team should get in.

“I feel like the history that we have and the success we’ve had in the postseason, the youth that we have continues to show improvement, we’re trending upward. We play a difficult schedule every year and I think you should be rewarded for that. It’s a very difficult league, and we’ve played some traditionally tough places: Missouri, LSU, Ole Miss, Vanderbilt. We’ve had to grow up this year, and I think we have.”

After Missouri (34-21-1, 13-16-1) put together a rally in the seventh inning to tie the game at 3-3, Florida rebounded in the top of the eighth inning to regain the lead when Brady Smith drove in Austin Langworthy with a double into the left field corner for a 4-3 lead.

Christian Scott (6-3) kept the Tigers off the board for the final two innings to earn the win for the Gators.

The Gators opened the scoring in the second inning to take a 2-0 lead. Kendrick Calilao singled and Cory Acton followed with a double off the wall in right center. The center fielder misplayed the ball, which allowed both runners to advance and Calilao crossed home. A grounder from Jacob Young allowed Acton to score for a two-run lead.

In the third inning, Brady McConnell led off the frame with a walk and sprinted to third on a single from Langworthy. McConnell scored on a ground ball from Nelson Maldonado to make it 3-0.

The Tigers strung together four singles in the seventh to tie the game 3-3 on Chris Cornelius’ RBI single.

Freshman Nick Pogue continued to excel on the mound for the Gators, matching his career high with 5.1 innings pitched and no runs allowed. He had a career high six strikeouts and one walk. In three starts, he is 1-0 with a 0.57 earned run average (1 ER in 15.2 IP). Pogue has allowed just six hits with three walks and 12 strikeouts.

“We finally put it all together,” O’Sullivan said. “We’ve been swinging the bats really well all year long for the most part … I just wish we’d pitched like this the entire year, we probably wouldn’t be in the position that we’re in.

“They really battled. Nick Pogue, to go on the road and do what he did today, that’s three quality starts in a row for him. Jordan Butler looks like he’s trying to catch form and Christian Scott, what can you say, he was unbelievable. That’s the best fastball he’s had in quite some time. He was throwing sliders for strikes on both sides of the plate to both righties and lefties. It was a gutsy performance.” 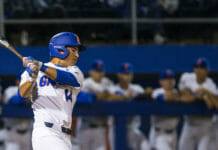