ORLANDO — No. 3 seed Florida fell to No. 2 seed Texas 4-2 in the semifinals Saturday of the NCAA men’s tennis tournament at the USTA National Campus.

The Gators chipped away at the deficit with straight set wins by Oliver Crawford at No. 1 and Andy Andrade at No. 5.

But Johannes Ingildsen lost his match at No. 3, as the Longhorns advance to the national championship match at 3 p.m. Sunday against No. 4 seed Wake Forest, the 4-3 winner of the day’s other semifinal against No. 9 North Carolina.

Making its first trip to the NCAA semifinals since 2005 and for the third time in program history, Florida’s quest to reach the championship match for the first time came to an end.

“Texas did a nice job today in the critical stages of matches,” said UF coach Bryan Shelton, who concluded his seventh and most successful season. “We always say those first 20 minutes of singles, you really want to set the tone and I thought Texas did a great job of that, coming out aggressively. I think our guys were up for the fight.

“I thought if we could get them deep, we had a good chance in the heat, extend the matches a little bit longer and continue to play, that we would have our chances. They did a good job at stepping up at the right time and executing.” 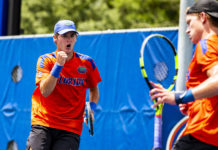 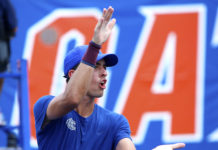