As soon as Amanda Lorenz pulled into second base Sunday, Florida softball coach Tim Walton headed for one of his players.

Not Kendyl Lindaman at the on-deck circle. Not Hannah Adams preparing to bat behind her.

Instead, he sought out cleanup hitter Jaimie Hoover.

All we need is a single.”

Hoover delivered by ripping a change-up into the gap in left-center to score Lorenz with the winning run against Tennessee and send Florida back to the Women’s College World Series for the 10th time in 12 seasons.

The final was 2-1 in the NCAA Gainesville Super Regional at Katie Seashole Pressly Stadium where every pitch seemed to drip with consequences through a pair of extra-inning games. Florida won this one in the bottom of the eighth, handing the win to workhorse senior Kelly Barnhill (34-12).

Barnhill threw 383 pitches for the three-game series and still had enough left to retire six straight Tennessee players after giving up the tying home run to Haley Bearden on the first pitch of the seventh inning.

“I wasn’t trying to do that,” Bearden said. “That was an accident, but I’m glad it happened. (The pitch) was right where I wanted it.”

In the eighth, the Gators (49-16) got a one-out double from Lorenz in her last at-bat at KSP Stadium. After Lindaman was walked, Adams grounded out sharply to first base to advance the runners.

Walton said he toyed with the idea of pulling Hoover, who had struck out three times previously against Tennessee starter Ashley Rogers (21-7).

“I can’t remember a player striking out three times and then getting the game-winning hit,” Walton said. “Not in this program, because I usually pinch hit for them on the fourth time. It crossed my mind.

“But I didn’t think they were bad swings. She was just kind of guessing.”

Rogers tried to fool Hoover with a change-up, but the junior delivered a two-out walk-off.

“I wasn’t really looking for a change, just something I could drive,” Hoover said. “It was amazing. That feeling is unbelievable.”

It was the second straight year for Florida getting a walk-off to go to the WCWS and almost as unlikely a hero as Jordan Mathews last year.

The Gators will face Oklahoma State at 7 p.m. Thursday in Oklahoma City in the first game of the eight-team tournament. Tennessee ended its season with a 43-17 record.

“It was two teams that refused to lose,”’ said Tennessee co-coach Karen Weekly. “But in the end, somebody has to.”

Florida jumped out to a 1-0 lead in the first inning on Sophia Reynoso’s sharp RBI single with two outs that scored Lorenz. Barnhill got a big double play in the fifth inning and escaped the sixth thanks to a caught stealing at third and one of her seven strikeouts.

With a crowd of 1,754 on a brutally-hot day ready for the clincher, Bearden wasted no time tying it up in the seventh.

But Barnhill didn’t flinch, keeping the Vols at bay and giving her team a chance to win.

“After the home run, I really felt like we could show some emotion,” Walton said. “Nothing. Not one bad look in the huddle. And I’ve seen bad looks in the huddle.

“It speaks to the resiliency of this team. It makes you feel good that your training them this way. And I’m just really proud of the moments.” 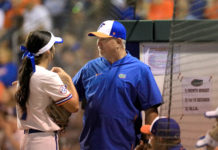 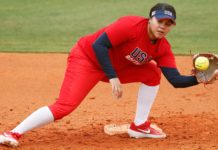