Florida keeps reaping the benefits of the 2nd annual Gator Grill Out.

Joel Williams, a 6-foot-1, 194-pound athlete/defensive back out of Madison Prep Academy in Baton Rouge, Louisiana, verbally committed to the Gators and coach Dan Mullen following an unofficial visit to Florida.

The No. 13-ranked athlete in the 2020 class by the 247Sports composite ranking, Williams announced a final three of LSU, Tennessee and Florida, with many speculating the four-star prospect would either commit to Tennessee or stay in-state and play for the Tigers. But a strong recruiting push throughout the spring by the Gators led Williams to shut his recruitment down Sunday and become the 12th member of Florida’s 2020 class.

After picking up two commitments in as many days, Florida’s recruiting class has moved back up to No. 5 in the 247Sports class rankings. 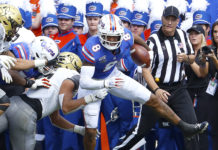