By Steven Wine, The Associated Press

He didn’t mind because the shower was celebratory — a reward for his major league homer. Alonso’s three-run shot capped a four-run ninth inning, and the Mets overcame 16 strikeouts by their hitters to rally past the Miami Marlins 7-3 Monday night.

Manager Mickey Callaway smiled watching Alonzo get the treatment for his first homer.

“We knew that was going to come at some point,” Callaway said. “It’s still a special occasion for a young player.”

Alonso led the minors last year with 36 homers and 119 RBIs. This year he’s batting .412 with six RBIs in four games, and Callaway has enjoyed watching outfielders react to his line drives.

“They all kind of just stand there like, ‘What’s it going to do?'” Callaway said. “The next thing you know, it’s over everybody’s head. It’s really incredible. There’s just true raw power there.”

Alonso said the postgame shower caught him by surprise.

“I didn’t know that was a thing until they told me to hop in the shopping cart and just poured whatever they could on me,” he said with a grin. “My eyes were stinging like really bad. I kept my mouth closed the entire time.”

Was it worth it?

“One hundred percent,” he said. 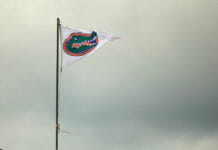 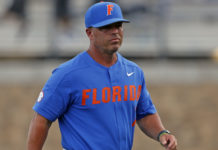