After bouncing back from a tough first round, the Florida women’s golf team ended day one Saturday of the Florida Gators Invitational in sole possession of second place at Mark Bostick Golf Course.

The Gators finished both round one and round two on par and only three strokes off the leader Miami. After early bogey trouble in the day, the team was able to recover with five Gators landing inside the top 25.

“I thought we battled really well today,” UF coach Emily Glaser said. “There were a few times where we played a little tight or didn’t take advantage of some opportunities. But we had a nice finish towards the end which is a great sign of toughness on a long 36-hole day.

“Miami played outstanding in the morning but we were able to make up a few in the second round. It’s going to be a very exciting finish tomorrow and a great opportunity for our team.”

Sophomore Addie Baggarly leads UF in a tie for second place after briefly sitting atop the leaderboard thanks to seven birdies and zero bogeys on the day. Sophomore Elin Esborn finished her second round with three birdies on her final three holes to recover from some bogey trouble on the front nine.

Junior Marta Perez also had back-to-back birdies late in the second round to recover from her front nine. Junior Sierra Brooks finished the second round with a team-low 68 to help balance a rocky first round. Freshman Clara Manzalini stayed consistent throughout the 36-hole day, shooting a one-over 71 in both her rounds. Freshman Jenny Kim is leading the Gators individuals, sitting inside the top 25 at T24 and +3 on the day.

Play will continue at 9 a.m. today, the final round. Live scoring will be available on GolfStat.com.

Lacrosse: At High Point, N.C., No. 16 Florida closed out its four-game road stretch on a high note, defeating High Point, 16-15 at Vert Stadium on Saturday afternoon.

Lindsey Ronbeck and Shannon Kavanagh had a day for the Gators – each recording five goals. Ronbeck finished with seven points, while Kavanagh added six of her own. Kassidy Bresnahan also recorded three points on two goals and one assist. Ronbeck controlled the draw circle for the Gators, winning a career-best 10 draws.

The Gators (3-3) return home for the first time in four games Wednesday, when they face No. 4 Syracuse at 7 p.m. at Donald R. Dizney Stadium.

“The team showed a lot of fight today and came together in the final minutes to pull out this win on the road against a really good High Point team,” UF coach Amanda O’Leary said. “That being said, we have some things to work on before facing Syracuse on Wednesday.” 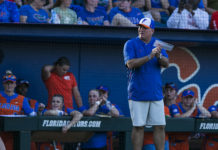