On a day off, he hit off the curveball pitching machine on his own.

The extra work seemed to work.

The freshman hit his second grand slam of the year and knocked in six runs Tuesday, as No. 5 Florida overcame a six-run deficit and slammed No. 10 FSU 20-7 before 5,385 fans at McKethan Stadium.

“I hit the ball and just hustled down the line,” the freshman said of his grand slam to the opposite field. “I didn’t know it was out.”

It was the fifth grand slam of the season for UF, but the real damage had been done earlier with 13 runs in the fifth and sixth innings.

“I’m not sure we’ve been involved with a game that goes one way first 4 1/2 innings and then just flipped,” said Florida coach Kevin O’Sullivan. “Both teams probably walked too many (a combined 15 batters). Both teams have to learn how to play in an environment like this.”

The win was the ninth straight for Florida over FSU and 15th in the last 17 games. It was also FSU coach Mike Martin’s last shot at the Gators in Gainesville, as he is retiring at the end of the year.

The winningest coach in college baseball was presented with a golf bag and a cruise and probably was ready to employ both while he watched 23 Gators come to the plate in the fifth and sixth inning.

But Florida took advantage of FSU mistakes and ended up pounding out 17 hits in the game. The Seminoles (13-2) were credited with three errors but had several other misplays that hurt them.

“It was a buzzkill when he hit the grand slam, but we weren’t down,” said right fielder Wil Dalton. “We weren’t tucking our tails between our legs.”

FSU got a run in the first and a solo homer in the third to jump on top early.  Flowers’ third homer of the season came after FSU had loaded the bases on walks against Christian Scott and Nolan Crisp.

The Gators climbed back in the game in the fifth inning thanks to some fielding mistakes by FSU, RBI singles by Calilao and Kirby McMullen and a pair of wild pitches.

FSU struck back for a run in the sixth, but the Gators weren’t done batting around in the game. UF scored eight runs in the inning, driving FSU’s defense crazy with well-placed bunts and stolen bases.

“We tried to do a lot of that early in the season, but quite frankly there were a lot of missed signs and missed execution,” O’Sullivan said. “We weren’t sharp. We spent a lot of time over spring break on the bunt game.”

Dalton beat out an infield single to tie the game, one of two hits for the junior.

“I just wanted to make sure I put the ball in play,” he said. “I laughed under my breath. With all ways I could have done it, I did it the way it’s the cheapest but it worked.”

A bunt single by Jacob Young made it 12-7 and Brady McConnell’s single — which extended his hitting streak to 15 games — made it 13 runs for the Gators.

But the ugliness wasn’t over for the ’Noles.

Calilao grand slam was one of five straight hits in a seven-run eighth inning. Blake Reese added a pinch-hit two-run homer in the inning.

The Gators now turn their attention to conference play with a three-game series against sixth-ranked Mississippi State at home. The SEC opener at McKethan Stadium will be at 6:30 p.m. 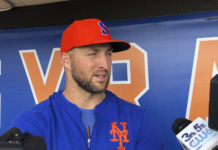